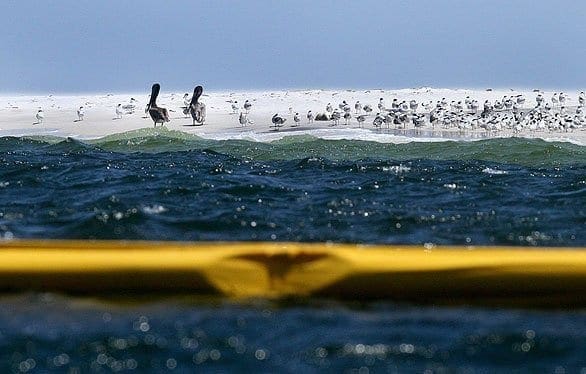 The Gulf, particularly on the Florida panhandle, is where I grew up on the ocean—as often as possible from Atlanta, Georgia. It’s where my love of the ocean began and where my commitment to marine conservation began. This spill might be a small problem compared to some of the issues the ocean is facing, but it’s heartbreaking nevertheless. Why? I think Carl Safina of the Safina Center says it far better and with far more knowledge than I can:

Don’t believe the globe is warming?

As if New Orleans doesn’t have enough problems. As if shrimpers and fishermen, already staggered, need an oil spill that will finish them.

When will it end? No one can say. Months, I’m hearing. “It could eclipse Exxon Valdez.”

A man asked tonight for my thoughts on what will happen if the oil reaches shore. I’d rather not think about it, I told the audience.

Explosions. Dozens of dead workers this month, lost between the coal mine and the brine. Point being: fossil fuels—coal and oil—are dirty. They make people sick. They make people die. They hurt innocents, human and non. Their time has passed.

After the blast at the rig, not enough booms could be found to contain the mushrooming billows of oil. Dispersants? They dissolve the oil, sinking it from the surface. What was polluting the surface now pollutes the whole sea. Right in the only spawning area of the remaining west Atlantic bluefin tuna, which are spawning now. No solution there. Plus, look, there’s not enough to stop the spreading slick. Burn it? Only 3 percent of the slick is thick enough to catch and hold the flame on the surface of the sea.

This latest catastrophe has begun licking the shore.

Herons will soon know it. Turtles will know it. Shrimp nurseries will be painted in crude. Dolphins will come for air in oil. And all those migrant birds coming across the Gulf. This is the peak of their spring migration. They’re landing exhausted in those vast marshes for a rest they believe will be only temporary. Those emerald expanses will blacken. And the terns and skimmers and plovers headed toward their nesting grounds on my Long Island shores; how much will that living tide will be thinned as the black tide arrives?

The price at the pump: $3 a gallon. The cost of the light sweet crude is different from the price. The cheaper the gallon, the higher the cost. Because the cheaper we pump the more we drink and the more we drink the thirstier we are. The U. S. burns over 20 million barrels of oil a day, about the same as the industrial behemoths Japan, Germany, Russia, China, and India—combined.

But we can’t burn this slick now coming ashore for us.

You pay for the ships. You pay for the crews. The fishermen’s unemployment insurance. The lives lost. The jobs lost. Children whose fathers have been deleted with a click. Your taxes at work. The Coast Guard. Obama pledges, “every single available resource.”

“We need that offshore production,” the oily head says on TV. “But this will fire up the environmentalists.”

Yes. Indeed it will.

Shrimpers have sued to regain a fraction of the cost. They have no idea what’s coming to get them. They’re looking at years and years.

“This is gonna be used like a bludgeon against our industry for a long time to come.”

But I hope he’s right. It’s only fair; the oil’s effects will bludgeon people, places, and animals for a long time to come.

The oyster grower says, “There’s fear we could be dealing with a catastrophe.”

“It’s premature to say this is catastrophic,” says the admiral.

“This is gonna be used like a bludgeon against our industry for a long time to come.”

I will certainly do what I can to make sure he’s right.

Dr. Carl Safina is founding president of Blue Ocean Institute and adjunct professor at Stony Brook University. His books include Song for the Blue Ocean, Eye of the Albatross, and his writing has been featured in National Geographic. He’s been profiled by the New York Times, Nightline, and Bill Moyers. His awards include a Pew Fellowship, Guggenheim Fellowship, Lannan Literary Award, John Burroughs Medal, and the MacArthur Prize, among others.