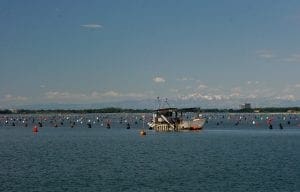 Mitigation mussel farming is a blue economy solution to nutrients that have accumulated in sediments.

In areas like the Baltic, policies have been largely successful in reducing terrestrial and atmospheric nutrient inputs to the regional sea but average nitrogen concentrations are decreasing closely while phosphorous concentrations are still increasing. This is because marine sediments in the region have acted as a sink — accumulating excess phosphorous and nitrogen. While external inputs have fallen, the sediments continue to release this legacy of nutrient pollution.

Kotta et al. (2020) have studied the use of native Mytilid mussels (Mytilus edulis and Mytilus trossulus) mitigating the risk of eutrophication by removing excess phosphorous and nitrogen from the Baltic Sea. Mussel farming using these native species is sustainable, low impact, circular and potentially cost effective.

The Baltic Sea is semi-enclosed, with a single ingress for salt water, this results in a brackish water environment with a salinity gradient running from salt water in the southwest to low salinity brackish waters in the northeast. Mytilid mussels grow bigger in more saline environments and the study found that the larger individual mussels growing in the outer Baltic had higher nitrogen and phosphorous content than the smaller mussels growing in the inner or central Baltic. However, while larger mussels may remove more phosphorous and nitrogen, in each individual the mussels in central and some inner areas of the Baltic can collectively remove the same amount of phosphorous and nitrogen overall. This is because of the lower detachment rates in these smaller mussels.

Previously there have been concerns about the use of mussel farming to remove excess nutrients with Standmark and Conley (2011) raising the issue of waste matter (faeces and pseudo-faeces) from the mussels creating hypoxic or anoxic sediments beneath them which would increase the release of phosphates as well as releasing ammonium. Additionally, low oxygen environments and the loss of biortubating organisms in hypoxic areas would also decrease the rate of denitrification in sediments. However, the evidence collected around the Baltic doesn’t support this — instead showing the opposite with higher bioturbation and better oxygenated sediments though these conditions can impede denitrification. Kotta et al. (2020) do, however, concede that there is a risk of nutrient enrichment around highly-sheltered areas and that planning the location of mussel farms will need to factor this in.

The study found that mussel farming could have benefits beyond their primary purpose including:

The authors note that there are still challenges to be addressed including spatial planning to locate the best areas for mussel farms while avoiding conflict with other users such as fishermen and tourism. Alongside further studies into factors that might affect the effectiveness of the mussel farms such as predation, storms, epiphytes and, in some areas, ice. Finally, the technology to support effective mitigation and commercial mussel farms in the different parts of the Baltic need to be developed.

While this is encouraging it does ignore the continued uncertainty around the future of the native Mytilid mussels in the Baltic Sea, with the prospect of decreasing salinity and increasing acidification, the long term survival and distribution of Mytilus mussels and their ability to protect the Baltic Sea from eutrophication must be questioned.