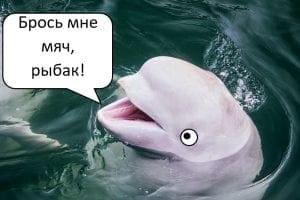 Hvaldimir had this to say.

The ex-Russian commando, Hvaldimir, has signed for the Norway national rugby union team.

That’s right! The lonely beluga who was found wearing a Russian spy camera on a harness is being recruited to bring a breath of fresh air to the Norwegian team.

“People around the world have been admiring Hvaldimir’s ball skills on Youtube,” the team manager told us. “It seemed only right we gave him an opportunity to earn the $10,000 he needs for a trip to Svalbard as well as a chance to get revenge on the Russian team.”

The talented beluga is expected to play the left-wing position to make the best use of his agility and ball handling skills.

While pundits remain unsure as to how a cetacean is likely to perform on the pitch, Hvaldimir remained confident and had this to say; “Look, I know some people are worried but lets be honest – it’s better than hanging around here: no food, no friends and the constant risk of humans hurting me.”

“Besides,” he added, “I can always fall back on my singing skills – canary of the sea aren’t I?”.