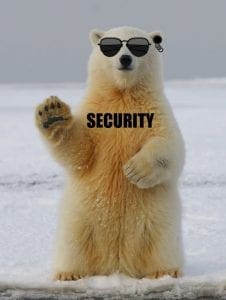 The Canadian seal hunting season came to an abrupt end when fishermen were faced with a firm refusal of entry by stern polar bears.

“I couldn’t believe my ears!” Canadian fisherman, Linden told us. “I was getting ready to jump on the ice with my trusty hakapik when a polar bear held up his hand to stop me.”

Linden told us the polar bear looked him dead in the eyes and said “How’s aboot you tell me what you’re here for eh?”

“Well I told him I was here for the clubbing. But he just looked me up and down, pointed to my clothes and said – NO SHIRT, NO SHOES, NO ENTRY.”

Bewildered fishermen complained to the DFO about the situation but they have yet to respond.

We reached out to the polar bears for comment: “Need culling my fuzzy butt. With melting sea ice it’s getting seriously difficult to catch anything to eat. Don’t need those fishermen stealing our seals. I mean, if it gets any worse up here in the Arctic, I’m going to have to shack up with my cousin Grizzela.”