MarineBio strongly supports Dr. Carl Safina's Sea Ethic to promote reverence for the sea and to encourage an ethical responsibility for humans to protect the sea.

What we must do is encourage a sea change in attitude, one that acknowledges we are a part of the living world, not apart from it.

Extending a sea ethic would mean recognizing the ocean’s importance to the continued existence of life on our planet and to human futures. From this recognition would flow an appropriate sense of moral imperative, commitment, and urgency—urgency toward ending overfishing and wasteful bycatch and aggressively rebuilding depleted ocean wildlife populations, stabilizing human effects on world climate, slowing habitat destruction, stemming global transport and accidental introduction of “alien” species, curbing the flow of contaminants and trash, developing sustainable seafood farming, cultivating an informed approach to the seafood marketplace, and implementing networks of protected areas in the sea.
– Excerpt from Launching a Sea Ethic by Carl Safina, The Safina Center

MarineBio strongly supports Dr. Carl Safina’s Sea Ethic to promote reverence for the sea and to encourage an ethical responsibility for humans to protect the sea. A Sea Ethic is the counterpart to forester and naturalist Aldo Leopold’s Land Ethic. For such a complicated and troublesome set of problems, we believe a sea ethic is the most sound solution to the problems faced by the ocean and marine life.

MarineBio also highly recommends Dr. Safina’s books, which describe many of our ocean’s problems in ways that urge all of us to find equitable solutions. These books read like entertaining travel narratives, yet they powerfully convey important messages in an objective, eloquent, and compelling manner.

Truly magnificent—Safina has done as much as anyone save Cousteau to change our relationship with the aquatic world. – Bill McKibben, The Boston Globe 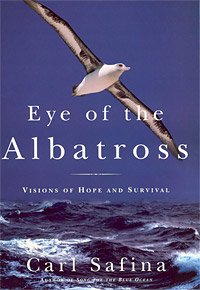 Eye of the Albatross
Visions of Hope and Survival
The immense creatures we call “albatross” are the greatest long-distance wanderers on Earth. Big birds in big oceans, albatrosses lead big, sprawling lives across space and time, traveling to the limits of seemingly limitless seas.

We accompany one particular albatross named Amelia throughout her several-thousand-mile foraging treks, sleeping aloft, foraging in darkness and daylight, searching out food enough for her patiently famished nestling. Amelia’s stupendous travels were tracked via satellite. As her goose-sized youngster sometimes waited weeks for a meal, I spent months in the distant seas of the world, chronicling Amelia’s journeys.

Albatrosses cover distances equivalent to flying around Earth at the equator three times every year. A 50-year-old albatross has flown, at minimum, 3.7 million miles. Theirs is a fluid world of wind and wild waters, everything in perpetual motion. And so they span long stretches of space and time, distant from any shore, seldom within sight of a coast, embedded in the breeze.

Because albatrosses range so far and live so long, they intersect and contend with almost every effect that people exert upon the sea. Everything people are doing to oceans, albatrosses feel. Amelia’s survival is a story of struggle, hope and the power of sheer persistence and life’s resilience. During her prodigious travels Amelia crosses paths with a spectacular array of creatures including other seabirds, fishes, whales, sharks, sea turtles, seals, and some extraordinary people. Sharing Amelia’s journeys will enlarge your life, and she will introduce you to the splendid company she keeps, truly awesome envoys of the magnificence of life on this ocean planet.

Winner of the John Burroughs Medal.

Get the EYE of the ALBATROSS today » Amazon

A beautiful, awe-inspiring tableau of our world as you’ve never seen it. – Christian Science Monitor

Dazzling… a stunningly intimate portrait of an environment. – Publishers Weekly

Riveting… Safina is an insightful, reform-minded, and splendidly literary scientist in the manner of Rachel Carson. His superlative report is both catalyst and inspiration. – Booklist (starred review)

In this beautifully written work, Safina blends history and science to offer, in a seamlessly telescoped style, first an ecosystem, then a species, and finally one bird, the last as compellingly drawn as the protagonist of a novel. The general reader cannot fail to be pulled deeply into natural history by reading it. – Edward O. Wilson, Harvard University

Carl Safina has become the poet laureate of things oceanic… The writing is equal to the subject, and the subject is the most magnificent of all flying creatures. – Richard Ellis, Los Angeles Times

An awestruck yet intelligent study by award-winning ocean ecologist Safina (Song for the Blue Ocean, 1998)… a briskly companionable account of days in the albatrosses’ midst. – Kirkus Reviews

Safina focuses on the qualities of peace and tranquility in nature… a refreshing approach to natural history writing. – Library Journal

One of Safina’s most engaging characteristics is his generosity of spirit. He cannot contain his delight in birds, fish and the profusion of life on the islands he visits. He also cannot contain his affection for the many people he encounters. – New York Times 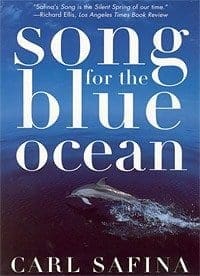 We accompany people whose lives and occupations in and on the oceans are a drama of clashing ambitions and a daily struggle for existence. We fish with commercial and subsistence fishers, we dive with research scientists, we walk through ancient forests where salmon spawn, and fly over vast clearcuts that have simultaneously taken the trees, the salmon, and the foreseeable future. We visit the shark fin shops in Hong Kong for a glimpse of what China’s new-found capitalism means for oceans around the globe. We sleep alongside Islamic separatists who seek desperately to protect their coral reefs.

My empathy here is as much with people as wild nature, and I convey the dilemmas intertwining both. In the end, we find reason for hopefulness in a very unlikely place—a dangerous, heavily armed fishing village on a remote island near the Indonesian border.

It has been said that oceans connect the world because they touch all shores. Today’s changing oceans pull together universal themes about resources, autonomy, economies, ideologies, and human nature that weave the context of our life and times. Although I believe this book is the most thorough and up-to-date account of the world’s seas, it is in many ways about much more than the oceans.

Get the Song for the Blue Ocean today » Amazon

Language that can carry a reader to a world rarely seen… Written in luscious strokes. – Provincetown Banner

If you love the oceans, read this book. If you are concerned about the future of mankind on this water planet, read this book…. I cannot remember a book that has affected me more deeply. – Big Game Fishing Journal

A pleasure to read. – Kirkus Reviews

Particularly welcome and timely… a frightening and insightful book. – The Oregonian

About twenty pages into this book you may discover that you are not so much reading it as savoring it. Safina is that rarest of writers—he knows how and when to get out of the way of his own story. – Whole Earth

In this remarkable book, Carl Safina takes us on an odyssey across our ocean planet… This is a tale told accurately, fairly and with compassion… Song for the Blue Ocean is peopled with ordinary and extraordinary people whose efforts inspire and offer hope… In the end, though, this is a deeply shocking book… read it. – Callum Roberts, Conservation Biology

An excellent, thought-provoking book that is difficult to pigeonhole. – BioScience

Passionate, disturbing…. Safina is one of the world’s leading voices for protection of the oceans and the creatures within them. From this solid position of authority, he could have written a worthy tome. Thank goodness he didn’t. Instead, Safina has written a highly personal account of his experiences as he follows fishermen, biologists and others at the front lines of what will surely be the big conservation battle of the early 21st century…. And, unlike many environmentalists, Safina never comes off as holier than thou… He recognizes that life is complicated, a welcome trait in a conservationist—and in a traveling companion. – Bob Holmes, New Scientist