Marine Ecology is the scientific study of marine-life habitats, populations, and interactions among organisms and the surrounding environment including their abiotic (non-living physical and chemical factors that affect the ability of organisms to survive and reproduce) and biotic factors (living things or the materials that directly or indirectly affect an organism in its environment). 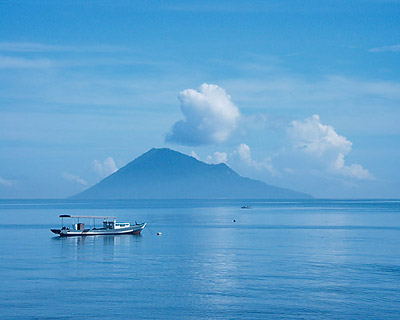 Manado Tua volcanic island where the first Indonesian Coelacanth was discovered in 1997.

What is Marine Ecology?

Marine Ecology is the scientific study of marine-life habitat, populations, and interactions among organisms and the surrounding environment including their abiotic (non-living physical and chemical factors that affect the ability of organisms to survive and reproduce) and biotic factors (living things or the materials that directly or indirectly affect an organism in its environment).

The study of marine ecology also includes the influence of geology, geography, meteorology, pedology, chemistry, and physics on marine environments. The impact of human activity such as medical research, development, agriculture, fisheries, and forestry is also studied under marine ecology. In some ways, marine ecology is more complex than the relatively straightforward study of a particular organism or environment because of the numerous interconnections, symbiotic relationships, and influence of many factors on a particular environment.

To understand the difference between marine biology and marine ecology, it may be useful to look at a community of organisms. A marine biologist may focus on behavioral relationships between the organisms in one particular species while someone studying ecology would study how the behavior of one organism influences another. An ecologist would also look at abiotic factors and how they influence that organism. A scientist studying community ecology might study a group of organisms to see how they influence other species and abiotic factors.

The major subcategories of ecology are:

The study of ecology in general includes all of the subcategories listed above as they apply to marine ecology, animal ecology, plant ecology, insect ecology, arctic ecology, tropical ecology and desert ecology.

What is needed to sustain life on Earth?

The first life on Earth was formed in the photic zone of the hydrosphere when organisms with more than one cell evolved in the deep ocean benthic zones. After the ozone layer formed, which protects land organisms from harmful UV rays, life began to evolve on land. After the continents separated and reformed, biodiversity began to increase as life began to adapt to new environments. Biodiversity can be observed at the genetic level, the species level, the population level, and the ecological level.

Abiotic elements like carbon, nitrogen and oxygen are present in great quantities in the biosphere. Phosphorus, calcium, and potassium are also present in smaller amounts. All are elements critical to the existence of life. Every element in the ecosystem transforms from mineral to organic forms and back to minerals and is never destroyed. Life depends on energy from the sun and the organisms that are capable of transforming light into chemical energy form the basis for the food chain. The process of photosynthesis converts light into chemical energy, resulting in the production of glucose and oxygen. Other organisms depend on glucose produced by photosynthesis for energy to fuel biological processes such as cellular respiration. During cellular respiration, organisms split glucose back into water and carbon dioxide. The breaking down of glucose releases and utilizes energy from the sun stored by photosynthesizing plants. The oxygen level of the Earth’s atmosphere is largely reliant on the amount of photosynthetic activity and respiration going on in the biosphere. A build up of elements in areas with a lot of organisms is prevented by circulation of the atmosphere with global air currents.

The Earth is full of cycles simultaneously occurring and interlaced. Water is cycled through the hydrosphere, lithosphere, atmosphere, and biosphere in relatively predictable movements. 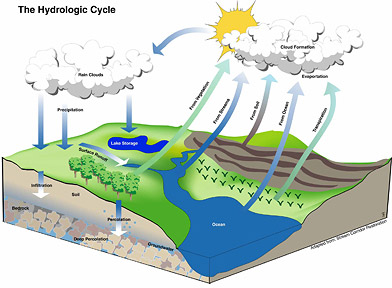 The flow of basic elements and the stability of the Earth’s climate and temperature depend on oceanic currents and the vast amount of water stored in the ocean. Ecologists often depend on computer modeling to determine how human activity can influence the intricate cycling of the biosphere.

Every organism is influenced somehow by every part of its environment. An ecosystem is any place or time where organisms interact with their environment. Ecosystems can be divided into the life in the area and the area in which life exists. Biocoenosis is the life in the area and the biotope is the environment by which life is influenced. One form of interaction in the ecosystem is the food chain, a system moving energy and matter through organisms and the environment. A microecosystem is a small system like a fish with parasites. A mesoecosystem could refer to the coral reef in which the fish lives and a macroecosystem might be the area in which the coral reefs are located and how they interact.

A grouping of populations of plant, animal, or microscopic organisms is referred to as a biocenose. When the number of organisms in a species becomes too small, inbreeding reduces the genetic diversity causing weakness in the species and possible extinction. The stability of a biocenose is also connected to biotic ecological interactions by organisms of the same species or organisms of different species.

Interactions between organisms of the same species are cooperation, competition, territorial divisions, and organization in the population. These factors are collectively referred to as intraspecific relations. The interaction of organisms of different species is referred to as interspecific relations and can include symbiotic interactions, competition, parasitism, and infectious disease. When two organisms occupy the same ecological niche, competition for resources can occur. It is important to determine whether the interaction is positive for both species, negative for both, or positive for only one species. Another example of an interspecific relation that is negative for one species and positive for the other is predation. Predatory activities form the basis for all food chains. While predation is natural and provides nourishment for the predatory species, in some cases it can upset the balance of the food chain when the prey species is already overexploited.

Biogeochemical cycles are present when minerals and organic materials are used by organisms and sent out as waste. Ecosystems can remain relatively stable when untouched by catastrophic events, detrimental human activities, or other unusual occurrences. Homeostasis, or self-regulation of ecosystems, occurs when supported by natural control mechanisms.

A biome is an ecological area separated from other areas by certain definitive characteristics and relies on the interdependent nature of ecosystems. Water, among other elements, can cycle from one ecosystem to another. Organisms like salmon and freshwater eels often move from one ecosystem to another. The biosphere includes all of the Earth’s biomes. An example of a biome is the photic portion of the ocean where sunlight is present and photosynthetic algae can be found. Biomes are divided into ecozones corresponding loosely with the continents and are further divided into ecoregions.

Species are related to each other through the role they play in the food chain as producers, consumers, and decomposers. Producers are photosynthesizing plants, consumers are herbivorous or carnivorous animals, and decomposers are organisms (such as bacteria) that break down organic material into minerals, which are eventually used by producers. There are more producers than consumers. The total amount of living matter in any place is called the biomass. When the biomass of plants increases it is measured as the primary productivity: the biomass produced by consumers and decomposers is measured as the secondary productivity.

Primary and secondary productivity are measurements used by scientists to determine an ecosystem’s capacity to support life.

An ecological crisis can take place when species or populations evolve in an unsustainable way. Sometimes the quality of the environment is lost after trauma, like a lack of rain or an increase in the temperature of a region. Other times, too much predation can ruin the balance of an ecosystem, as can be seen with overfishing by humans. Sometimes, too many organisms in one place will cause a poor living environment for others. There are different time scales for ecological crises ranging anywhere from a few months to millions of years. Extinction events can affect many species or just a few individual species. Human activities, like oil spills, can cause local crises as well as global crises like global warming. Even with a local crisis, the loss of a few species can have a disastrous effect on the survival of others in the food chain. A global crisis can result in a loss of nearly all species on Earth. The most common example of such a crisis is the extinction of the dinosaurs. Other examples of well-known ecological crises are the Permian-Triassic extinction event, the Cretaceous-Tertiary Event, Global Warming from the Greenhouse effect, the hole in the ozone layer, desertification and deforestation, and nuclear meltdowns like Chernobyl. Fortunately, nature always prevails and when species disappear, new species evolve.