Biotic structure describes the way organisms interact within an ecosystem.

The opposite of biotic is abiotic, which includes the physical and chemical factors present in the environment.

Every organism in a species has a limit of tolerance, zone of stress, and optimum range for the abiotic factors present in its environment. Ecosystems can be simplified into three basic groups of organisms: producers, consumers, and decomposers. Some organisms can be in more than one category.

The definition of an ecosystem is a group of living organisms existing in a network of interactions with each other and their environment. The three feeding relationships are the food chain, the food web, and trophic levels. Non-feeding relationships can be defined as symbiotic or competitive. 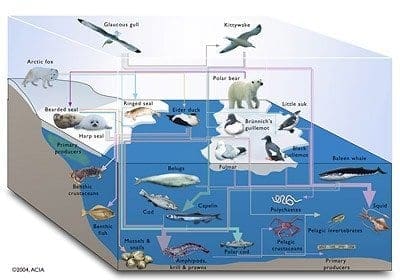 Arctic marine food web. Research in the Beaufort Sea suggests that ice algae at the base of the marine food web may have already been profoundly affected by warming over the last few decades. – Arctic Climate Impact Assessment (ACIA)

Food webs illustrate the relationship between animals and what they feed on in the biotic community. Food webs also show how material and energy is transferred and lost within the ecosystem.

Each organism is a source of energy and material for another organism. The path in which biomass is moved can be illustrated in a food chain or food web. Grouping organisms into trophic levels is helpful when attempting to understand how much energy has been lost from the capture of the energy from the sun or from chemicals by primary producers. Primary producers, or autotrophs, can be any species that produce organic material from energy and/or from inorganic sources to be used by other organisms. In the deep sea, primary producers do not have access to sunlight; therefore, they utilize energy from chemicals and are called chemoautotrophs.

A food chain is different from a food web because it illustrates only one energy and nutrient path in an ecosystem. Each platform is a trophic level with one organism that begins with one primary producer and ends with a secondary or tertiary consumer. A typical food chain might go like this: algae-copepod-fish-squid-seal-orca. In this example the orca feeds on the seals and the seals feed on the squid which feed on fish which feed on copepods. The base of the food chain is formed by algae which are eaten by copepods.

Trophic levels are the platforms in the food chain that indicate a position for a particular organism. In a very basic way, a trophic level will indicate whether an organism is a foundation species, primary consumer, or secondary consumer. Information about whether the organism eats plants or animals can also be obtained. Most often trophic levels are used to determine how much energy is lost from the primary producers up to the tertiary consumers. For each trophic level in the food chain, energy is lost due to the laws of thermodynamics. Levels can be diagrammed to form a triangle with the apex formed by tertiary consumers, or apex predators. The primary producers yield the most profit from the energy of the sun. By the time this energy has been transferred up to the higher trophic levels much of it has been lost to the environment.

Symbiosis is a term most often used to describe two organisms living in a close association that benefits both of their survival. For example, clownfish live in sea anemones that have dangerous stinging tentacles, to which the clownfish are immune because they are protected by an outer layer of mucus. 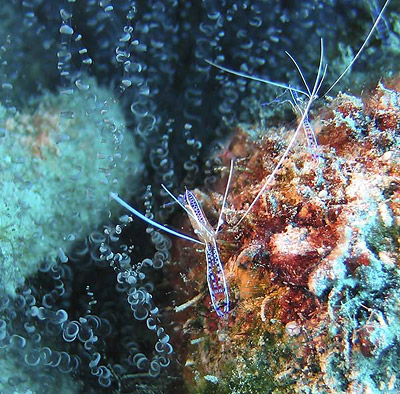 The clownfish is therefore protected by the sea anemone, and in turn, acts as bait to lure fish into the stinging anemone. Another example of symbiosis is the goby fish often found living in a burrow with a shrimp. The shrimp makes a burrow for the fish and even does some housekeeping. The fish in turn warns the blind shrimp of impending danger by touching its tail so they can both swim deeper inside their burrow.

Symbiosis usually involves a symbiont (for example, the smaller clownfish) and a host (the anemone which is larger). A microscopic symbiont like bacteria in a termite’s gut is usually called an endosymbiont. In ecological terms, symbiosis can mean more than just a mutually beneficial relationship. The four basic types of symbiosis are: parasitism, mutualism, commensalism, and amensalism. With parasitism, the relationship is good for one organism and bad for the other. A mutual symbiotic relationship is when both organisms benefit, commensalism is when only one benefits (and the other is indifferent), and amensalism is when one is harmed and the other is indifferent. 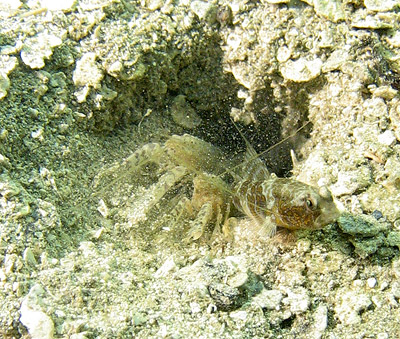 Bulldozer shrimp with their lookout sailfin blenny, note that both shrimp, which are nearly blind,
are making contact with the blenny with their antennas. Utila, Honduras 2005.

Species better adapted to their environment are able to survive and produce offspring. In biological terms, fitness refers to the number of offspring an organism is able to produce (versus the most well known term indicating greater physical strength). Charles Darwin explained that the competition between species is what results in organisms that are better adapted to their environment. Whenever there are limited resources, species or even organisms within a species are forced to compete in order to survive. Competition occurs in predator-prey relationships when both are trying to survive.

Since Darwin wrote about evolution, some details have been fine-tuned. Scientists no longer believe that competition is the only relationship driving evolution. The symbiotic relationships observed in animals like the blenny and the shrimp are evidence that evolution is driven by cooperation, integration, and mutual dependence instead.

The common definition of a predator is one that hunts and kills other organisms for food. It could be claimed that herbivores are predators due to some similarities in their style of seeking and eating food. For example, an animal that eats part of a plant would be a herbivore and one that hunts for single-celled algae might be a herbivore, or predator. 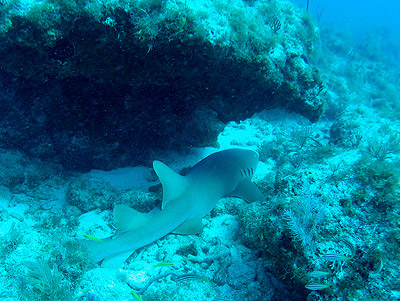 Most predators are carnivores, although some are omnivores meaning they also eat plants. A predator like the great white shark is called an apex predator because no other animal (except humans) hunts it for food. A keystone predator is one that keeps the entire ecosystem in balance and if it were removed the ecosystem would collapse. Scientists generally use the Volterra-Lotka equations to study predator-prey relationships with a mathematical model.