First Japan, now China. Not that the US is much better in terms of wildlife conservation, but I don’t understand how this can continue to happen. It’s sickening. Isn’t part of what life is all about is leaving the planet a better place than you found it for future generations? Are people who “get that” really that much in the minority? And are exotic animals really that necessary as a form of protein? They cannot possibly taste good. It’s a status thing, and that’s even more disgusting. 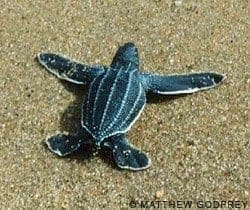 Leatherbacks are Critically Endangered — and there were 44 of them on one small boat, a huge number when the species is depleted to such an extent, being smuggled into China.

‘Noah’s Ark’ of 5,000 rare animals found floating off the coast of China

Jonathan Watts in Beijing
Saturday May 26, 2007
The Guardian

Endangered, hunted, smuggled and now abandoned, 5,000 of the world’s rarest animals have been found drifting in a deserted boat near the coast of China.

The pangolins, Asian giant turtles and lizards were crushed inside crates on a rickety wooden vessel that had lost engine power off Qingzhou island in the southern province of Guangdong. Most were alive, though the cargo also contained 21 bear paws wrapped in newspaper.

According to conservation groups, the haul was discovered on one of the world’s most lucrative and destructive smuggling routes: from the threatened jungles of south-east Asia to the restaurant tables of southern China.

The animals were found when local fishermen noticed a strange smell emanating from the vessel, which did not have any registration plates, on Tuesday, the Guangzhou Daily reported.

When coastguard officials boarded the 25-metre craft, it was reportedly deserted and stripped of identification papers. They found more than 200 crates full of animals, many so dehydrated in the tropical sun that they were close to death.

The animals — which weighed 13 tonnes — were taken to port, doused with water and sent to an animal welfare centre. “We have received some animals,” said an office worker at the Guangdong Wild Animal Protection Centre. “We are waiting to hear from the authorities what we should do with them.”

According to the local media, the cargo included 31 pangolins, 44 leatherback sea turtles, 2,720 monitor lizards, 1,130 Brazilian turtles as well as the bear paws. Photographs showed other animals, including an Asian giant turtle.

All of these south-east Asian species are critically endangered, banned from international trade and yet openly sold in restaurants and markets in China’s southern province of Guangdong, which is famous for its exotic cuisine.

The accidental discovery highlights the negative impact that the growing power of Chinese consumption is having on global conservation efforts.

According to wildlife groups, China is the main market for illegally traded exotic species, which are eaten or used in traditional medicine. Pangolins are in great demand because their meat is consider a delicacy and their scales are thought to help mothers breastfeed their babies.

As a result of demand, the pangolin populations of China, Vietnam, Laos and Cambodia have been wiped out. With traders moving further and further south, the animal is declining even in its last habitats in Java, Sumatra and the Malaysian peninsula. It is a similar story for many species of turtle, tortoise, frog and snake.

Despite China’s international commitments to get to grips with this illicit activity, the trade is booming. Border controls are lax, and smugglers know that fines are usually far lower than the potential rewards. As a result, raids and seizures of banned products occur regularly. One recent raid on a restaurant in Guanghzou turned up 118 pangolins, 60kg of snakes and 400kg of toads.

Traffic – an organisation that monitors and tries to prevent the smuggling of endangered species – welcomed the fact that China’s authorities had reacted swiftly to rescue the animals but said much more needs to be done to prevent similar cases.

“Unfortunately, this is all too common. This trade is a far bigger threat to these species than habitat destruction,” said Chris Shepherd, senior program officer with Traffic Southeast Asia. “The vigilance on the border has to be improved, cooperation with source countries needs to be strengthened, there should be better monitoring of dealers, and the people violating the laws must be penalised severely.”

Despite the ban on pangolins, many restaurants offer their meat. The Chaoxing restaurant in Shenzhen said yesterday that pangolin was available but was only suitable for large dining parties.

“The animal is very big – about 10kg,” said a waitress contacted by telephone. “We serve it in hotpot. That is the tastiest way.”

According to recent reports in the Chinese media, the price of 1kg of pangolin served in Guangdong or Yunnan is between 600 and 800 yuan per kilogram (between £43 and £50).

A Guangdong chef interviewed last year in the Beijing Science and Technology Daily described how to cook a pangolin.

“We keep them alive in cages until the customer makes an order. Then we hammer them unconscious, cut their throats and drain the blood. It is a slow death. We then boil them to remove the scales. We cut the meat into small pieces and use it to make a number of dishes, including braised meat and soup. Usually the customers take the blood home with them afterwards.”