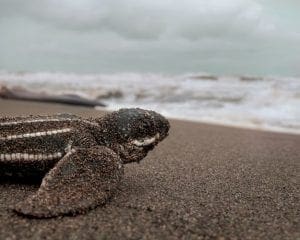 Leatherback turtles are the largest species of sea turtle and they face a wide range of threats to their long-term survival.

Leatherback turtles (Dermochelys coriacea) are the largest species of sea turtle. Found around the world’s oceans they travel distances up to 4,828 km, using their large pectoral flippers to swim as fast as 24kph. Diving to as deep as 1000m these turtles follow the diel movements of jellyfish — their preferred prey.

Their enormous size, speed, leathery shell and thick scaly skin helps to protect them from predators but they now face a new threat. However, this has done little to protect them from human activities — hunted, caught as bycatch, vulnerable to choking on plastics, their eggs harvested — many populations of leatherback sea turtles have become critically endangered.

Additionally, many people are now familiar with the fact that rising temperatures in nesting beaches can influence the gender of hatchling turtles — impacting the future recruitment of sea turtles. Yet a more insidious effect has come to light in a recent study by García-Grajales et al. (2021). Looking at the influence of nest incubation temperatures on hatchling size and shape, they found that turtles developing in warmer sands had narrower shells, lower body mass, shorter flippers and smaller appendages.

While the scale of the impact this may have on the fitness of leatherback turtles needs more study it is highly concerning that an animal that relies on its size, speed, its ability to dive deep and travel far can be so affected by rising temperatures.