How age, not gender, determines mercury bioaccumulation in brown-footed boobies 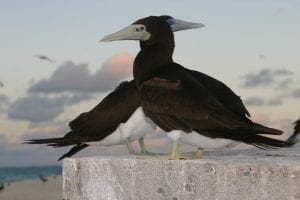 Brown boobies can be found around the world’s tropical oceans.

Brown boobies (Sula leucogaster) are large seabirds commonly found in tropical oceans around the world, as such they have the potential to be a good species to use in monitoring mercury levels in the marine environment.

In their paper, Bighetti et al. (2021), set out to study how mercury (mercury and methylmercury) accumulates in these birds looking for differences between adults and juveniles as well as between male and female birds. Brown boobies show sexual dimorphism with the females being larger than the males. The study tested whether the larger females, whose diet includes larger prey items, accumulated higher levels of mercury than males and whether adults, who had experienced longer term exposure, accumulated higher levels of mercury than juveniles.

Blood tests showing the mercury levels in the circulatory system of the birds allowed the researchers to monitor short-term exposure to mercury while feathers and eggs allowed them to test for accumulation over longer-term periods.

Their findings showed that despite the size difference between male and female brown boobies, the mercury concentrations in their feathers were not significantly different – allowing for both sexes to be used as biomonitors for mercury.  As might be expected, juvenile brown boobies had lower total mercury and methylmercury levels in their feathers but the levels of mercury in the blood were consistent across all age groups because they only show the short term exposure to a similar diet.

The paper noted that “This seabird population had low Hg concentrations, below to the threshold limit.” which makes the study a useful baseline for further research of mercury contamination in brown boobies in other colonies around the world.