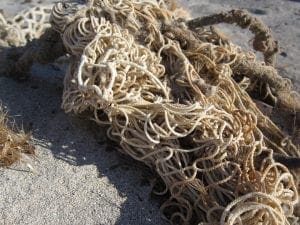 Most people will be familiar with the threat macroplastic debris poses to pinnipeds — asphyxiation, choking, blocking the digestive tract, open wounds (tightening around growing animals or pulled tight by drag in the water) and/or impairing the ability to forage successfully. However, while emotive images of individuals suffering from encounters with plastic are well known, the potential impact on populations are not.

They found that even the lowest rate of entanglement they used had a significant effect on population growth, reducing it by around 20%. More shockingly, the highest reported entanglement rate reduced population growth by just over 90%. As such their findings suggest that modelling entanglement rates should form a part of any pinniped conservation management plan and likely policy to protect any marine species affected by plastic entanglement. The authors acknowledge that their method has some limitations but offer that it gives a “straightforward and potentially useful approach for the standardized prediction of impacts at a population level of different rates of plastic pollution and entanglement and could be applied in distinct populations of the same species around the world.”