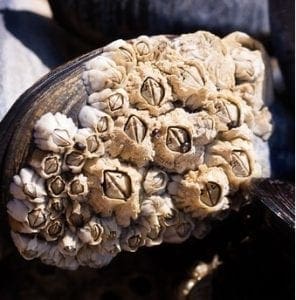 Barnacles settle on a range of hard substrates following the cyprid larval stage.

It’s tough being an acorn barnacle – you want a nice turbid environment with plenty of oxygen and food but getting there as a larvae less than 6mm long is a heck of a challenge. That’s why acorn barnacle cyprids are astonishing swimmers. With six swimming limbs (thoracic appendages) the cyprids are well-equipped but until now scientists haven’t been able to observe how they use these limbs because of their fast movement (stroke intervals of around 5 milliseconds). Enter Eleanor Lamont and Richard Emlet who have studied the swimming of acorn barnacle cyprids using high speed videography.

Lamont and Emlet who were able to observe the cyprids beating their limbs in a wave pattern (metachronal power strokes) before bringing all six limbs back into position simultaneously (synchronous recovery strokes). When pushing through the water, the cyprids spread out the feather-like bristles on each swimming appendage to give them more power, then collapse these to pull the limbs back into position for the next stroke. Averaging 16 beats per second, the cyprids can travel at around 1.4 cm per second (equivalent to 25 body lengths). To give an idea of how fast that is, by my reckoning if a barnacle was the size of Michael Phelps it would be travelling at 48.25 m per second (108 mph)!

You can find out more details about acorn barnacle cyprid swimming in “Swimming kinematics of cyprids of the barnacle Balanus glandula” by Eleanor I Lamont and Richard B Emlet, 19 April 2021 which is published in Integrative and Comparative Biology available through Oxford Academic.