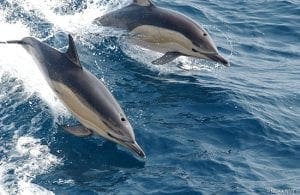 Common dolphins are often found as an offshore species with weak social bonds.

Common dolphins (Delphinus delphis) are often found as wide-ranging offshore species that form large pods with weak social bonds. While this has long been held to be characteristic of the species a new study by Mason, Kent and Bilgmann (2021) has shown that a resident population in Port Phillip, Australia, show much stronger social bonds than their offshore counterparts.

The study, which investigated the social structure of 12 resident adults between 2007 and 2014, found that the bay population had unusually close social structures for common dolphins with non-random associations and several close relationships. Mason et al point to the social structure bearing closer similarities to other inshore dolphin species. As such it may be that social structures in dolphins are shaped by necessity – with inshore populations, who have a limited geographical area and limited but predictable food sources, requiring greater understanding and cooperation than offshore populations with unlimited space but unpredictable food sources. More than anything the study highlights how flexible dolphin society can be and the need to understand population level dynamics for conservation and management.