Our ocean covers 72% (and rising) of this small planet and is home to most of the globe's biomass, or living matter, and biodiversity.

We know that from bacteria to plankton to the blue whale, life in the ocean greatly affects life on land, yet we know very little about the ocean. At least 80% is yet to be explored… 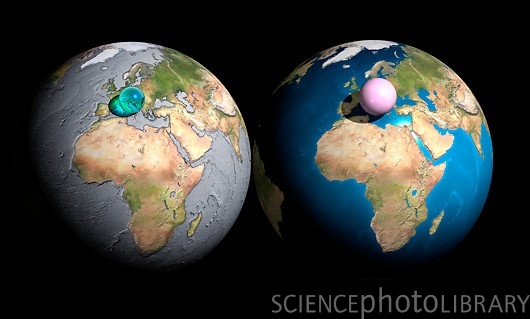 Conceptual computer artwork of the total volume of water on Earth (left) and of air in the Earth’s atmosphere (right) shown as spheres (blue and pink). The spheres show how finite water and air supplies are. The water sphere measures 1,390 kilometres across and has a volume of 1.4 billion cubic kilometres. This includes all the water in the oceans, seas, ice caps, lakes and rivers as well as ground water, and that in the atmosphere. The air sphere measures 1,999 kilometres across and weighs 5,140 trillion tonnes. As the atmosphere extends from Earth it becomes less dense. Half of the air lies within the first 5 kilometres of the atmosphere.

This section of MarineBio explores some of what is known about the ocean and provides an online introduction to marine biology and ocean science. Here we begin the journey into this planet’s largest living space—The Ocean.

The ocean is studied by separating it into different, though interrelated, scientific disciplines. To fully understand life in the sea we must consider the big picture: marine life and its interaction with its environment, as well as other life, including humans. The following sections will provide you with an overview of Marine Biology in terms of the physical, chemical, and biological marine environment.

The processes that have molded the ocean basins over billions of years.

Ocean life is largely made up of the same chemicals that comprise the ocean.

Sounds in the Sea

Sound travels wide and fast underwater—the acoustics of the ocean. Can you hear me? Good…

The effects and causes of the continuous flow of ocean water and its surface which is always rising and falling.

Tectonic plates to the lives of creatures that exist in the most extreme environments.

Where most marine life lives and almost all fishing takes place…

Everything outside of coastal areas… the real wild blue yonder…

Places of abundant life, lots of ice and the coldest places on Planet Ocean.

The cold, dark, deep that makes up 80% of the ocean living space.

An ocean (from Greek Ωκεανός, Okeanos (Oceanus)) is a major body of saline water, and a principal component of the hydrosphere. Approximately 72% of the Earth’s surface (~3.61 X 1014 m2) is covered by ocean, a continuous body of water that is customarily divided into several principal oceans and smaller seas.

More than half of this area is over 3,000 meters (9,800 ft) deep. Average oceanic salinity is around 35 parts per thousand (ppt) (3.5%), and nearly all seawater has a salinity in the range of 30 to 38 ppt. Scientists estimate that 230,000 marine life forms of all types are currently known, but the total could be up to 10 times that number.

Though generally described as several ‘separate’ oceans, these waters comprise one global, interconnected body of salt water often referred to as the World Ocean or global ocean. This concept of a continuous body of water with relatively free interchange among its parts is of fundamental importance to oceanography.

The major oceanic divisions are defined in part by the continents, various archipelagos, and other criteria. These divisions are (in descending order of size): 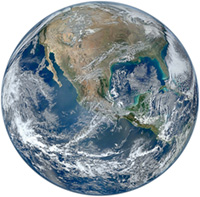 The Pacific and Atlantic may be further subdivided by the equator into northern and southern portions. Smaller regions of the oceans are called seas, gulfs, bays, straits and other names.

Geologically, an ocean is an area of oceanic crust covered by water. Oceanic crust is the thin layer of solidified volcanic basalt that covers the Earth’s mantle. Continental crust is thicker but less dense. From this perspective, the earth has three oceans: the World Ocean, the Caspian Sea, and Black Sea. The latter two were formed by the collision of Cimmeria with Laurasia. The Mediterranean Sea is at times a discrete ocean, because tectonic plate movement has repeatedly broken its connection to the World Ocean through the Strait of Gibraltar. The Black Sea is connected to the Mediterranean through the Bosporus, but the Bosporous is a natural canal cut through continental rock some 7,000 years ago, rather than a piece of oceanic sea floor like the Strait of Gibraltar.

Despite their names, smaller landlocked bodies of saltwater that are not connected with the World Ocean, such as the Aral Sea, are actually salt lakes.