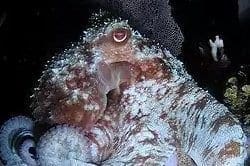 The Caribbean Reef octopuses in the study preferred not to have neighbours.

The aggregations have largely been assumed to be driven by factors in their habitat such as plentiful resources and lower predation pressures rather than a desire to socialise with other octopuses. However, social communication through body signaling (colours and patterns), non-aggressive physical contact and evidence of a serotonergic signaling systems (the system that rewards social behaviour in humans) in California Two-Spot octopuses (Octopus bimaculoides) suggest that octopuses may be truly social. More than this – quickly established dominance hierarchies in lab experiments and mating events in the wild imply a plasticity to their behaviour – the ability to adjust their social behaviour to their situation.

Using the landlocked marine ecosystem of Sweetings Pond on Eleuthera island in the Bahamas, O’Brien et al. (2021) deployed a range of den systems including grouped dens that allowed for social, neighbourly behaviour and isolated dens that allowed for anti-social behaviour. The study observed the Caribbean Reef octopus and found that they showed a distinct preference for isolated dens that avoided the possibility of dealing with neighbouring octopuses. While the study isn’t conclusive it helps to build up the weight of evidence behind the complexity of octopus behaviour – far from being asocial and ignoring their peers they make active choices to be social or asocial depending upon their needs. Like other intelligent animals, octopuses behaviour isn’t fixed or ubiquitous but flexible and adaptive.