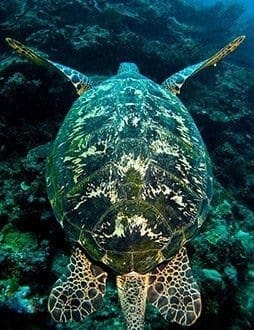 Oceana, the world’s largest international ocean conservation organization, released a new report today that finds the Deepwater Horizon oil spill extremely dangerous for sea turtles inhabiting the Gulf of Mexico. Specifically, sea turtles can become coated in oil or inhale volatile chemicals when they surface to breathe, swallow oil or contaminated prey, and swim through oil or come in contact with it on nesting beaches.

Five of the world’s seven sea turtle species inhabit the Gulf of Mexico for some portion of their lives. These species (green, hawksbill, Kemp’s ridley, leatherback and loggerhead) are all listed as either “threatened” or “endangered” under the U.S. Endangered Species Act (facing a high and very high risk of extinction, respectively).

“Our use of oil and gas is causing climate change and making our oceans more acidic,” said Jacqueline Savitz, senior campaign director at Oceana. “As if that was not bad enough, it’s now killing endangered species. Americans can never be fully compensated for the loss of national treasures like sea turtles, caused by unnecessary and careless offshore drilling.”

The Deepwater Horizon oil spill can have the following impacts on sea turtles:

Oceana is urging the Obama administration to ban further offshore drilling immediately and permanently. Oceana is also urging the government to determine the cumulative impact of human activities on sea turtles and reduce the number of sea turtles harmed to a level that will allow recovery of sea turtle populations.