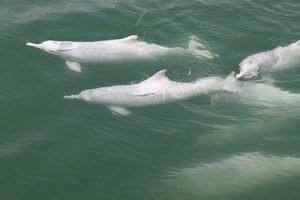 Indo-Pacific Humpback dolphins are listed as vulnerable by the IUCN Red List.

A new study by Xiyang Zhanga, Fengping Zhana, Ri-Qing Yu, Xian Sun and Yuping Wu has found that pregnant Indo-pacific humpback dolphins transfer organic contaminants to their unborn offspring. Their investigation found that polycyclic aromatic hydrocarbons (PAHs), organochlorine pesticides (OCPs) and polychlorinated biphenyls (PCB) were all found in both the mothers and foetuses.

While mother dolphins were able to concentrate OCPs and PCBs in their livers and kidneys foetuses showed no evidence of this – with the OCPs and PCBs concentrating more in muscle tissues. PAHs with low molecular weights, greater water solubility and more bioavailability were most abundant in the foetuses and lipid solubility in PCBs seems to aid transfer across the placental barrier. Furthermore OCs with lower molecular weights and low log KOW were found to be more concentrated in foetal blubber, lungs and livers than those of the mother dolphins.