Penguin Social Pariah turns up to colony in casual wear 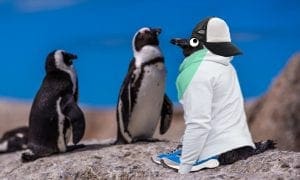 A penguin has become a social pariah after performing the faux pas of returning to his colony in casual wear. After braving strong currents and sheer climbs Kevin found himself face to face with thousands of birds dressed in black tie. Instead of having the good grace to quietly retreat and change clothes, Kevin doubled down as he explained in his interview with us:

“What the heck?! I thought, no one said it was formal dress. But I didn’t let it get me down instead I decided to play it cool.”

Witnesses report  he was then seen trying to initiate “fist bumps” with some members of the colony and loudly shouting “Yo! Sup?” to others. Quickly closing ranks, the birds of the colony gave him the cold shoulder.

After a painfully cringe-worthy 20 minutes of this, Kevin surreptitiously dumped his hoodie, cap and sneakers behind a nearby rock.

“I have zero regrets,” said Kevin, commenting on the event, “I guess those stuffy old birds just don’t get fashion and trends like I do.”

“Kevin’s always been a bit of an airhead,” said his long time friend Penelope, “he forgets we have counter-shading to hide us from predators – I’ll be honest, I’m surprised he hasn’t been eaten yet.”

We reached out to local Orcas who had this to say: “Yeah, we’ve seen that penguin – sticks out like a sore thumb but no one wants to eat something that funny looking”.