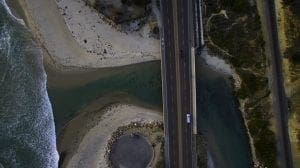 Estuaries are critically important for humans and wildlife alike.

While many studies have focused on the issue of Marine Plastic Pollution, a review by Pinheiro et al. (2021) has found that few studies of the major source of this pollution – rivers and estuaries take into account important factors.

Yet Pinheiro et al. found that few studies on plastics in estuarine systems looked at either the transboundary issue or the role of environmental gradients in “predicting plastic distribution and accumulation in water, sediments, and organisms.” The sheer quantity of plastic can be staggering with estuarine systems accruing up to 45,500 pieces of plastic in each cubic metre of water, 567,000 pieces in each cubic metre of sediment and 131 pieces of plastics in individual animals and plants. But so far our understanding of how these plastics move through estuaries to marine environments have been restricted by small sample sizes, short-term studies, sample techniques that don’t accurately capture the scale of small plastics, and sampling methods that do not take into account the environmental gradients in estuarine environments. Additionally, the review finds that “Key processes governing plastic contamination along estuarine trophic webs remain unclear” because most studies focus on species instead of trophic groups or functional guilds and do not account for ontogenic dietary shifts.

The review recommends the following:

The review: “The fate of plastic litter within estuarine compartments: An overview of current knowledge for the transboundary issue to guide future assessments” by L. M. Pinheiro, V. O. Agostini, A. R. A. Lima, R. D. Ward and G. L. L. Pinho, 15 June 2021 is published in Environmental Pollution available through the ELSEVIER.