Rivers of microplastics: source and sink? 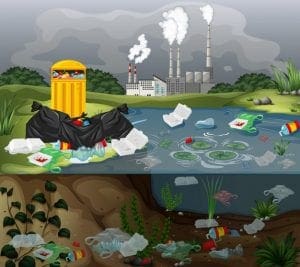 Microplastics enter river systems from a range of sources – both primary and secondary.

Microplastics are now thought to be ubiquitous in marine environments with recent studies finding traces in 67% of sampled sharks (Parton et al. 2020), travelling their way up the food chain through zooplankton and even in newly discovered deep sea amphipods (Eurythenes plasticus).

These microplastics can be either primary or secondary in nature – plastics that are already smaller than <5mm in length such as nurdles, synthetic fibres and microbeads or plastics that have fragmented from larger objects. Most plastics entering aquatic ecosystems do so from terrestrial sources – either through coastal or riverine vectors. Rivers have long been used by industry and to carry our waste away. Plastic producing or plastic using industries located near water bodies can lose nurdles or plastic pellets used in manufacturing processes directly into aquatic environments while synthetic fibres and microbeads (from laundry and cosmetics) are more likely to be discharged in effluent from Wastewater Treatment Plants (though these can be effective at removing microplastics the efficacy does vary between WWTPs). Meanwhile rivers act as catchments for surface runoff and watersheds which can carry secondary microplastics from a wide range of sources including plastic litter, landfills and vehicle tires (which can be washed off roads into water systems as well as wind-borne).

It does, however, raise the question that, if river sediments are acting as a source for microplastics then what impact does navigational dredging have when disturbing, resuspending, transporting and dumping these sediments?

The paper “Dispersal and transport of microplastics in river sediments” by Beibei He, Mitchell Smith, Prasanna Egodawatta, GodwinA.Ayoko, Llew Rintoul and Ashantha Goonetilleke, 15 June 2021 is published in Environmental Pollution available through ELSEVIER.