Seahorses and other Syngnatharia originated in the ancient Tethys Sea 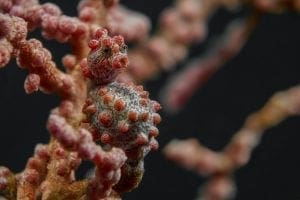 Seahorses are one of the most familiar species of Syngnatharia

Syngnatharia are a diverse clade of percomorph fishes found throughout tropical and warm-temperate waters with many of its members found in the Indo-Pacific. The group includes: trumpetfishes, goatfishes, dragonets, flying gurnards, seahorses and pipefishes of which seahorses will be immediately familiar to most people.

Their wide distribution combined with the long-rang dispersal capabilities of many of its members has made it challenging to pin down where in the world this group of fishes comes from.

Using a phylogenomic study of 25% of sygnatharian species, including representatives from all ten families, Santaquiteria et al. (2021) were able to trace the sygnatharia back around 87 million years to the Tethys Sea in the Late Cretaceous. From there they occupied the Indo-Pacific with different groups independently colonising the east Pacific and the Atlantic in a mostly east-west pattern before the Tethys Seaway closed.