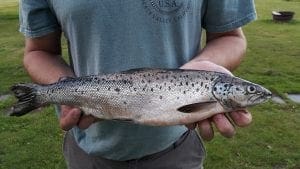 Atlantic salmon (Salmo salar) are an important species of fish both for their ecological value and commercial value. These anadromous fish are spawned in rivers, travel to the sea to grow and mature before returning to the stream or river they were born in to spawn the next generation. As such the ability to swim against strong currents and up natural barriers is important, which is why a recent study published in the Canadian Journal of Zoology is concerning.

Greenberg et al. have studied the impact of raised water temperatures (5.6 °C) on the egg incubation and early developmental stages of Atlantic salmon. They approached the paper believing that salmon developing in cold waters would demonstrate slim body shapes with large pectoral and dorsal fins. What they found was different. Atlantic salmon developing in cold waters had thick or deep body shapes with large pectoral fins and normally developed dorsal fins while those developing in warmer waters had slimmer body shapes and smaller pectoral fins though the dorsal fin remained similar.

Why does this matter? Salmon are adapted to swim upstream against currents, changes to their morphology may very well impact their swimming ability. If their capacity to swim upstream and reproduce is detrimentally affected by rising water temperatures as a result of climate change then this could have serious repercussions for annual recruitment in Atlantic salmon.