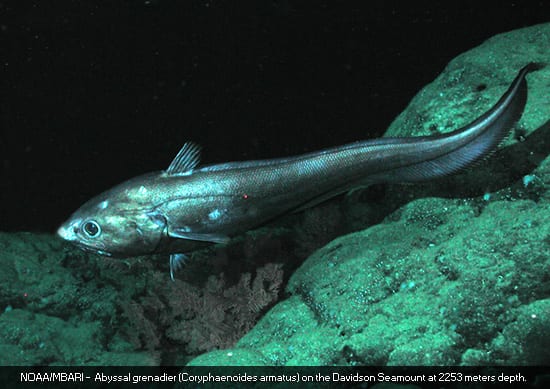 Due to the harsh environment that they live in, grenadiers have evolved physical adaptations that help them to survive in the dark depths of the ocean. Many species possess light organs that contain luminous bacteria that functions as a source of light. Finding food is also a challenge so the barbel under their chin acts as a sensory receptor for locating prey.

Abyssal grenadiers belong to the family Macrouridae which includes 405 other species across 36 genera. The family name ‘Macrouridae’ translates to ‘great tail’ in Greek which accurately describes their appearance.

As their name implies, these grenadiers are species of the deep abyss. They are classified as having a bathypelagic (inhabiting the deep sea) lifestyle and are common in all the ocean’s of the world at depths ranging between 282 m to 5180 m.

They are found worldwide except for the Mediterranean Sea and the Arctic, Indian and Southern oceans.

Identifying, locating and capturing prey is a challenge for organisms living in the abyss where no light can penetrate from above. Adaptations are required in order to live in this environment and overcome the lack of resources that the deepsea has on offer.

The lateral line is a system of sense organs used by fish to detect movements and vibrations in the water that generally runs from the operculum to the start of the caudal fin (tail). Although present in all fish species, it is highly developed and plays a more important foraging role for those inhabiting deeper depths. Some other methods used include bioluminescence (glowing light that acts as bait) and electrical field sensing (using the electrical field that prey give off).

In order to forage, Abyssal grenadiers swim vertically to allow the barbel under their chin to make contact with the sea floor. In doing so, they can use sensory cues to determine exact locations of prey items. They are dominant predators and scavengers in ocean basins and can rapidly consume prey.

Abyssal grenadiers are generalist feeders that eat a variety of prey items, with their diets shifting ontogenetically (as the organism develops). Younger grenadiers tend to feed on benthic invertebrates including crustaceans and sea cucumbers whilst adults typically feed on sea urchins, pelagic and benthopelagic fish and cephalopods. Large individuals also occasionally eat highfin lizardfish (Bathysaurus mollis) that can grow up to 80 cm.

Reproductive output is limited in the abyss due to a lack of food in the deep sea. Abyssal grenadiers mature at a later stage compared to most other fishes and reproduce only once in their lifetime. Adopting the semelparous reproductive strategy and having a low metabolic rate helps them to save energy which is difficult to obtain at the depths they inhabit. Fecundity (the ability to produce an abundance of offspring) also decreases with depth which is another reason why the grenadier reproduces in this way.

Knowledge gaps still exist around the abyssal grenadier’s reproduction and early life history, however, it is believed that once they have laid eggs, they float towards the surface where the larvae develop at shallower depths. Juveniles then return to the abyss which is consistent with the switch in foraging strategy from visual in juveniles to olfactory (smell) in adults.

Abyssal grenadiers, Coryphaenoides armatus, are currently listed as ‘Least Concern’ by the IUCN Red List. The status of population trends of this species is currently unknown due to difficulties in data collection at the abyssal depths.

There are currently no species-specific conservation measures and no CITES legislation in place for this species as there are no known threats to their populations.

Abyssal grenadiers are scavengers that play an important ecological role within the deep sea ecosystem. Through consumption of food fall from above, organic matter is redistributed across the ecosystem benefiting the benthic community.

Underwater ROV’s (Remotely Operated Vehicles) and baited camera systems are successful and effective tools used to study deep sea environments. Abyssal grenadiers have not been shown to display avoidance or hiding behaviors when exposed to the vehicles which may suggest a lack of natural predators.

These fish are not targets of the commercial fishing industry due to their small size (and therefore low meat yield) and the remoteness of their habitat. They are, however, caught as bycatch in deep-water fisheries though this isn’t thought to be a threat to their populations.

Bailey et al., (2007). A taste of the deep-sea: The roles of gustatory and tactile searching behaviour in the grenadier fish Coryphaenoides armatus.

Jamieson et al., (2006). Behavioural responses to structures on the seafloor by the deep-sea fish Coryphaenoides armatus: Implications for the use of baited landers.

Windom et al., (1987). Comparison of trace metal concentrations in muscle tissue of a benthopelagic fish (Coryphaenoides armatus) from the Atlantic and Pacific oceans.