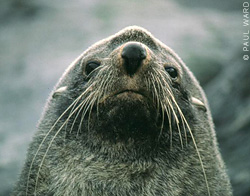 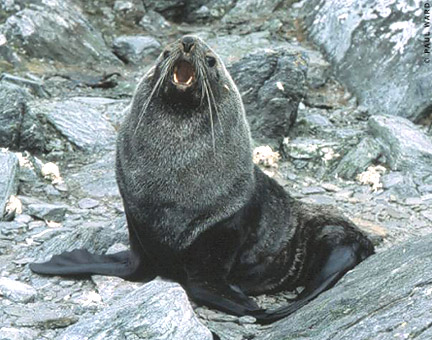 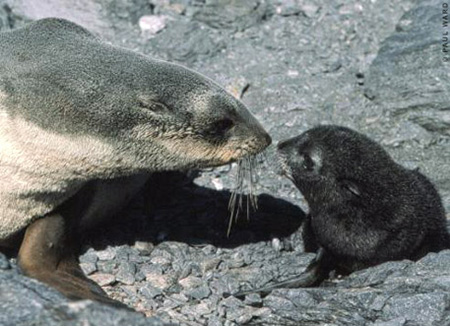 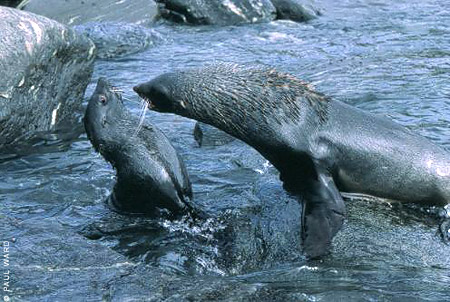 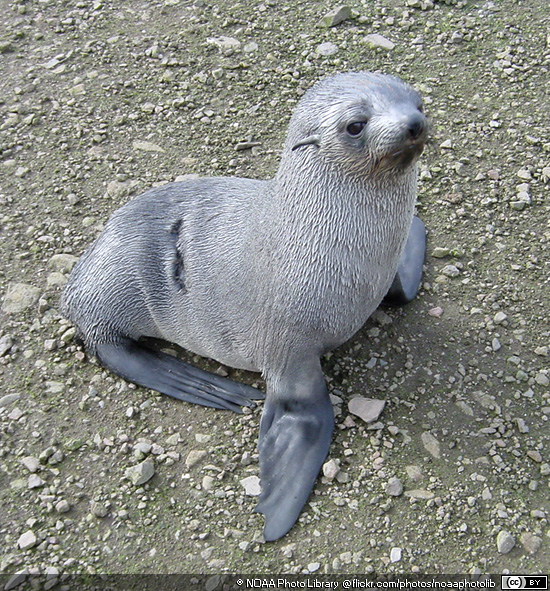 Antarctic fur seals, Arctocephalus gazella (Peters, 1875), also known as Kerguelen and southern fur seals, like other fur seals, are distinguished by the presence of external ears and their ability to use their flippers to prop themselves up into a “standing” position. Adult males of measure 1.6-2 m in length and weigh between 90-210 kg, averaging 188 kg. Adult females are significantly smaller measuring 1.2-1.4 m in length and weighing between 25-55 kg, averaging 37 kg. Pups measure between 60-73 cm in length at birth and weigh 4.5-6.5 kg, with male pups weighing slightly more than the females. Antarctic fur seals can dive for up to 10 minutes as deep as 250 m, however dives usually average 3-4 minutes at 30-40 m. Males can live up to 15 years of age, females up to 23 years.

The breeding range for Antarctic fur seals is restricted mainly to seasonally ice-free islands near the Antarctic Polar Front. More than 95% of the species breed near the coast of South Georgia. Other breeding sites are found on the islands of: Bouvetøya, Crozet, Heard, Kerguelen, Macquarie, Marion, McDonald, Prince Edward, South Orkney, South Sandwich, and South Shetland Islands. In 1990, The total population size was estimated at 1.5 million, however, more recent estimates put the population at over 4 million. Wandering seals have been found as far north as Brazil and the Juan Fernández Islands.

Antarctic fur seals feed primarily on krill, fish, and squid. Birds are eaten occasionally outside the breeding season. Nursing mothers near South Georgia are dependent on krill during the breeding season, therefore the availability of krill is important to the reproductive success of this animal. The colonies at Macquarie Island and the Kerguelen Islands rely more on a diet of fish and squid. Antarctic fur seals dive at night to feed.

Predators of Antarctic fur seals include orca (killer whales) and leopard seals, which prey on juveniles and pups.

Both sexes of the Antarctic fur seal reach sexual maturity at 3-4 years but males do not reach territorial status until about 6-10 years. Breeding season is from November to January. The males arrive early to compete for breeding territory and females by fighting with other males. Each male dominated breeding territory includes about 10 females. Females give birth about 2 days after arriving, then mate 6-8 days later. They then leave to feed at sea for 3-5 days at a maximum range of 150-240 km from the breeding territory. They return to nurse for 1-2 days then begin the feeding cycle again which lasts up to 4 months — a shorter cycle than other fur seal species. Males do not feed during breeding season and lose about 1.5 each day for the ~30 days that they are on land.

Pups are born with a black fur coat, which molts 2-3 months later revealing a silver-gray coat that eventually takes on a more brown color that turns darker by adulthood. Adult females and juveniles often have a cream-colored chest, and occasionally, individuals are creamy white all over.

Some cross-breeding of Antarctic and Subantarctic fur seals, Arctocephalus tropicalis, has been observed at Macquarie and Marion Islands.

Pup mortality over the first year of life has been calculated at 24% and is greater on the denser breeding beaches.

Antarctic fur seals were nearly driven to extinction during the 18th and 19th centuries when they were hunted for their fur. The species is now protected by the Convention for the Conservation of Antarctic Seals (CCAS), the Antarctic Treaty and the legislation of various countries within its range. This species is also listed as an Appendix II species under CITES. Because of this protection, the population has been growing steadily since the 1950s, and population growth is now estimated at 10% per year.

One of the threats to this species is entanglement in man-made debris such as polypropylene straps, nylon string, and fishing nets, which can cause death by drowning or starvation.

Unusually high levels of toxic heavy metals have been found in Antarctic fur seals but the effects and sources of these are uncertain.

A 6 million hectare marine park was established in 2000 for Macquarie Island covering all Tasmanian waters 5.6 km offshore, which further protects these seals.