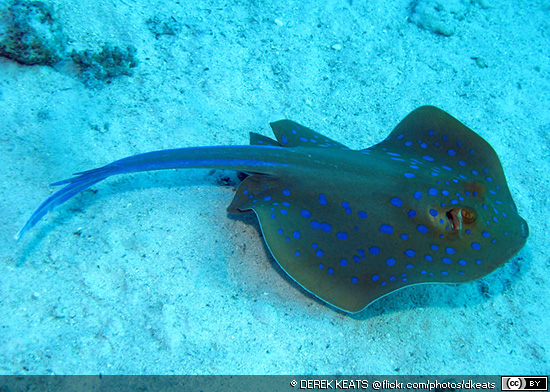 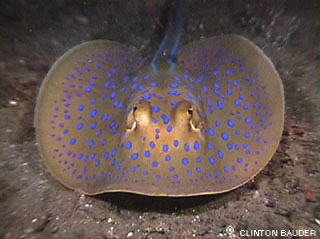 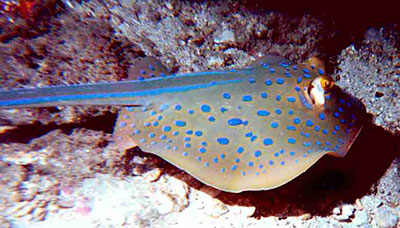 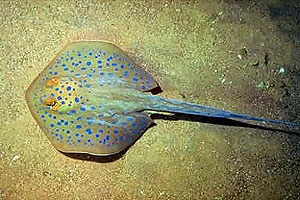 Blue-spotted rays, Taeniura lymma (Forsskål, 1775), aka blue-spotted fantail rays, blue spotted stingrays, blue spotted rays, and ribbontail stingrays, are colorful stingrays with large bright blue spots on an oval, elongated disc and blue side-stripes along their tails. Their snout is rounded and angular and the disc has broadly rounded outer corners. They have a short tapering tail that is less than twice their body length when intact, with a broad lower caudal finfold that extends to the tail tip. Their disc has no large thorns but does have small, flat denticles along their midback in adults. There is usually 1 medium-sized stinging spine on their tail found further from the base than most stingrays. They are gray-brown to yellow, or olive-green to reddish brown in color on their dorsal (upper) side, white on their ventral (under) side. They reach a maximum length about 70 cm.

Blue-spotted rays are found around coral reefs in a depth range up to to 20 m. They are only rarely found buried under the sand. In the Indo-West Pacific they are found in the Red Sea and off East Africa to the Solomon Islands, north to southern Japan, and south to northern Australia.

Blue-spotted rays migrate in groups into shallow sandy areas during the rising tide to feed on mollusks, worms, shrimps, and crabs; they disperse at low tide to seek shelter in caves and under ledges.

Blue-spotted rays are ovoviviparous. Distinct pairing with embrace ane bear up to 7 young at a time.

Blue-spotted rays are venomous. Small specimens are popular among marine aquarists, though they do not survive well in aquariums. Although they are very wide-ranging and common, this species is subject to population decreases because of capture for the marine aquarium fish trade and by widespread destruction of reef habitats.