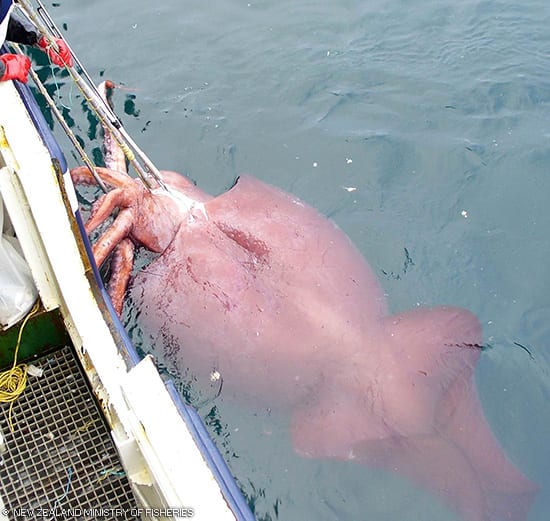 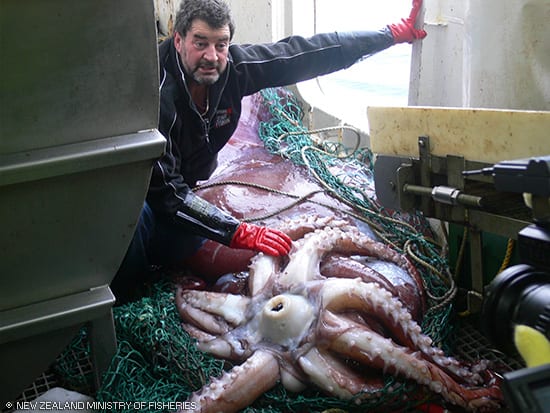 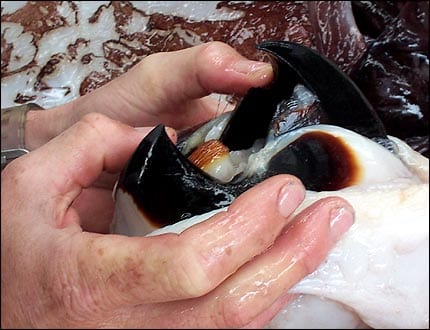 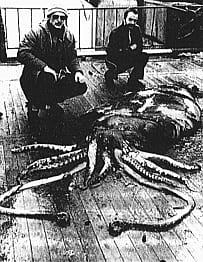 Colossal squid, Mesonychoteuthis hamiltoni (Robson, 1925), aka Antarctic cranch squid, are one of the largest, most elusive, and mysterious of the cephalopods. These massive squid are reported to measure up to 14 m in total length with mantle lengths of about 2-4 m (which would make adult colossal squid quite a bit larger than giant squid, Architeuthis dux) and they can weigh an estimated 150 kg.

These amazing creatures were first identified in 1925 when 2 colossal squid arms were recovered from a sperm whale’s stomach. Since then, few specimens have been recovered and there is still very little known about this species. Colossal squids have eyes that measure about 25 cm in diameter which are thought to be the largest eyes in the entire animal kingdom. They also have the largest beaks of any squid, which makes them a fearsome predator along with the 25 rotating hooks found in two rows on the ends of their tentacles.

Colossal squid, Mesonychoteuthis hamiltoni, are a deep-water species, living usually deeper than 1,000 m which makes it very difficult for scientists to gather data on them (though juveniles have been found above 1,000 m to the surface). So far they have had to depend mostly on juvenile specimens caught by deep sea trawlers. Colossal squids have been found in waters surrounding the Antarctic, primarily south of 40°S.

Colossal squid, Mesonychoteuthis hamiltoni, have been known to prey on large fish species, including Patagonian toothfish (aka Chilean sea bass) caught on longlines set by the fishermen. Sperm whales are known predators of colossal squid in the Southern Ocean.

Reproduction is thought to be similar to a related species, Teuthowenia pellucida, but it is actually unknown for Mesonychoteuthis hamiltoni as no mature males or females have yet been collected or observed. See the Giant Squid and Colossal Squid Fact Sheet at TONMO.com for more information.

Not enough is known on colossal squid populations to determine their conservation status. Because of its remote habitat, this species is not considered dangerous to humans.