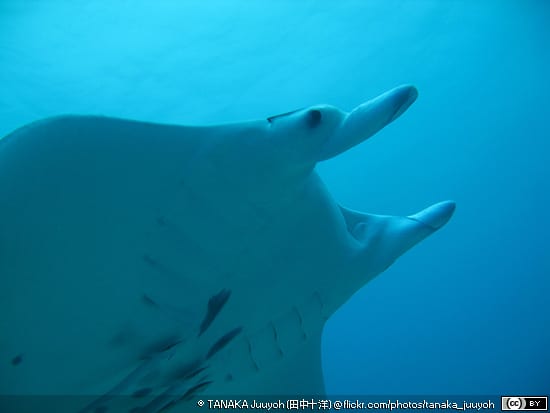 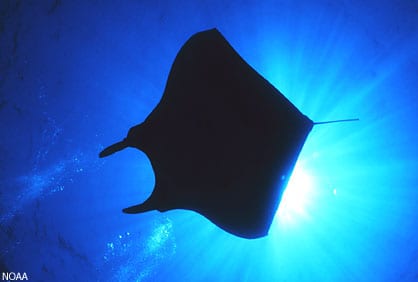 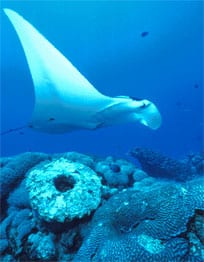 Giant mantas, Manta birostris (Walbaum, 1792), aka Atlantic mantas, devil rays, mantas and Pacific manta rays, are the largest of the rays and are closely related to sharks. These harmless, majestic creatures have short tails and no stinging spines. They are very acrobatic and are able to leap high from the water. Remoras (Echeneida sp.) are frequently seen with mantas near their mouths and even inside their gill cavities, hanging out to feed on parasites on the manta’s body and lost bits of the manta’s food.

The Manta genus is what is commonly thought of as manta rays. There is also a Mobula genus that are smaller bottom-dwelling rays. To confuse things even further, two of the Mobula species, Mobula mobular and Mobula hypostoma, are also commonly referred to as the devil fish and lesser devil ray, respectively.

It was previously thought that three species of giant manta existed:

Recent studies of genetic samples, however, show that Manta hamiltoni is the same species as Manta birostris and Manta alfredi is its own species.

These graceful swimmers swim by moving their wing-like pectoral fins, which can grow up to 9 m wide, but average about 6.7 m. The largest weigh about 1,350 kg. Mantas are dark brown to black on the dorsal side with pale margins; they are mostly white on the ventral side.

Giant mantas are found in temperate and tropical waters near continents and islands of all oceans. They are known to migrate around the world in search of plankton-rich waters.

Giant manta rays are primarily plankton feeders. They use the unfurled cephalic (head) fins on the head (which look like horns when they are not feeding) to funnel plankton-rich water into the mouth where gill rakers filter out the plankton. Some small crustaceans and fish may complement the diet. Like other filter feeders, manta rays have reduced, nonfunctional teeth. They are no threat to larger ocean animals unless threatened; their only defense is their size and large powerful wings. Mantas do not have venomous spines on the tail. According to Yapese myth, mantas can wrap their wings around humans to squeeze them to death, but this is untrue. They can, however, pack a very powerful punch with their wings.

Giant mantas reproduces via aplacental viviparity, also called ovoviviparity, where the young hatch from eggs inside the female’s body. Yolk nourishes the pups instead of placenta. Females give birth to a 1-2 pups that measure about 1.2 m wide and weigh roughly 45 kg. Young mantas grow very rapidly.

During the mating season (December to late April in Yap), mantas gather in large numbers and several males can bee seen courting single females. The actual mating is done belly-to-belly. A few months later, 1-2 manta pups are born rolled up like tubes. They become active as soon as they have rolled out their wings. The actual birth of a manta is something rarely seen by humans and it has only been captured on film once.

On Yap, the young mantas are sometimes seen in the waters surrounding the mangrove system where they take shelter during their infancy.

There is minimal danger unless attacked (especially harpooned) or otherwise startled, but the enormous size and power of this ray should invite respect.

Giant mantas are listed as Endangered A2bcd+3d on the IUCN Red List of Threatened Species:

ENDANGERED (EN)
A taxon is Endangered when the best available evidence indicates that it meets any of the criteria A to E for Endangered (see Section V), and it is therefore considered to be facing a very high risk of extinction in the wild.

“The giant manta ray now joins over 16,000 endangered species to be assessed with this serious threat level. At this stage, 30% of sharks and rays are now threatened with extinction.“