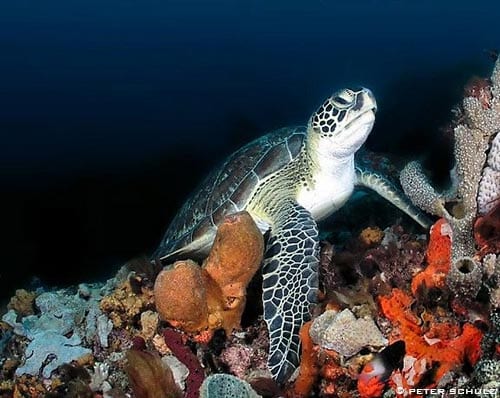 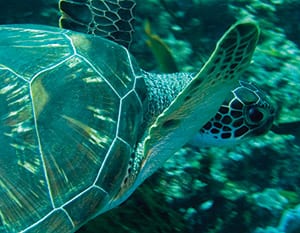 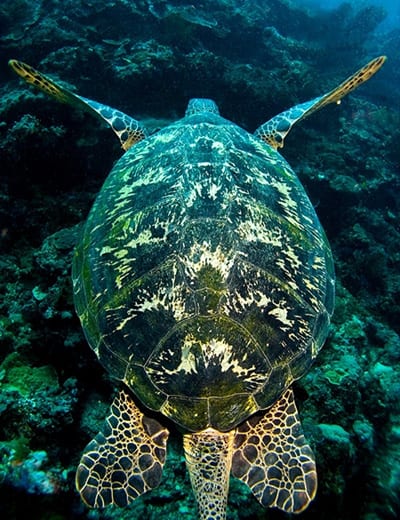 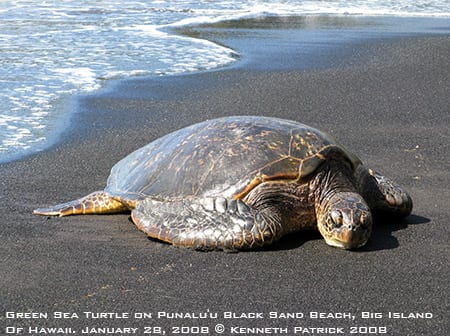 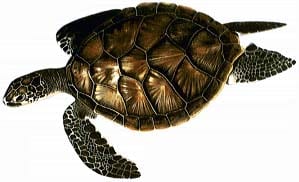 Green sea turtles, Chelonia mydas (Linnaeus, 1758), are Chelonians — which means they have four legs and a tough shell made of two parts which join at the sides.

The green sea turtle’s legs are shaped like flippers. Their heads are lizard-like, with a hooked beak and toothless jaw. Adult green sea turtles may grow up to 99 cm long and weigh 180 kg.

The top half of their shell is called the carapace. It feels smooth and is gray, green, brown and/or black. It’s tougher than the under shell, which is called the plastron and is yellowish white. Males have a larger tail than females, slightly longer, narrower carapaces than females and enlarged curved claws on the front flippers for gripping the female when mating.

Controversy rages about splitting Chelonia mydas into subspecies based on the many size differences between populations in different parts of the world. The population found in the eastern Pacific is often called the black sea turtle, and is sometimes described as a separate species (Chelonia agassizi). Individuals from the East Pacific are smaller than their counterparts in the Western Caribbean in a wide range of external measurements, and are particularly dark in color, a trait that has shown to be genetically influenced.

The closely related flatback sea turtles are a little smaller than the green and lives off the coast of Northern Australia.

Sea turtles are some of the largest turtles in the world and live in almost every ocean of the world. Their smooth shells and paddlelike flippers help them speed through the water as fast as 24 kph. These long distance travelers have been known to swim up to 4,828 km.

Sea turtles spend almost all their lives submerged but must breathe air for the oxygen needed to meet the demands of vigorous activity. With a single explosive exhalation and rapid inhalation, sea turtles can quickly replace the air in their lungs. The lungs are adapted to permit a rapid exchange of oxygen and to prevent gasses from being trapped during deep dives. The blood of sea turtles can deliver oxygen efficiently to body tissues even at the pressures encountered during diving. During routine activity green and loggerhead turtles dive for about 4 to 5 minutes and surface to breathe for 1 to 3 seconds. A female loggerhead tracked at sea made up to 500 dives every 12 hours.

Turtles can rest or sleep underwater for several hours at a time but submergence time is much shorter while diving for food or to escape predators. Breath-holding ability is affected by activity and stress, which is why turtles drown in shrimp trawls and other fishing gear within a relatively short time.

Green sea turtles are found in the Pacific, Atlantic and Indian oceans (worldwide in seas where temperature does not fall below 20°C). They are sensitive to heat and cold and prefer the warmer parts of the oceans.

Males never leave the water, but females swim to the shore to lay their eggs.

Although sea turtles move swiftly in the ocean, they are slow and defenseless on land. Male sea turtles almost never leave the water. Female sea turtles leave the ocean only to lay eggs and, for most species, nest only at night. A female may nest every 2-3 years.

Nesting can take between one and three hours. After a female turtle drags herself up the beach, she hollows out a pit with her back legs and deposits from fifty to two hundred eggs. When the last egg is laid, the turtle covers the eggs with sand, tamps down the sand with her plastron, and flings more sand about with her flippers to erase any signs of the nest. The green sea turtle has also been observed often digging another “decoy” nest next to the real one to deceive predators and keep their eggs safe.

After about two months, the hatchling turtles emerge at night. The light reflected off the water from the sky guides them to the sea. These days, car headlights, street lamps, or lights on buildings near the beach cause some hatchlings to travel in the wrong direction. Waiting herons make fast meals of other hatchlings. Any babies still on the beach in the morning are easily picked off by predators or die in the hot sun. It is thought that when the surviving hatchlings reach maturity, they return to the beach where they hatched to lay their eggs.

The female green sea turtle lays 70-130 eggs – each one about the size of a ping-pong ball. About two months later the eggs hatch and the young turtles head straight for sea. Somehow they know that they must live in the water and not on land. Baby green sea turtles weigh about 1 ounce, and are about 5 cm long.

The green sea turtle is now an endangered species, and the population has been completely eliminated in some areas, although they are still reasonably abundant in other areas. The turtles have been over-exploited for their meat, hides and eggs, and the predictability of their nesting habits has made them easy victims. Exploitation is now strictly controlled in some areas, and imports are banned in many countries.