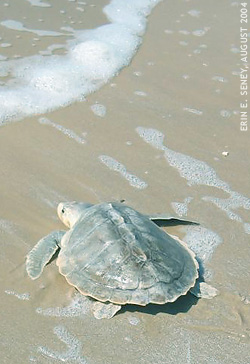 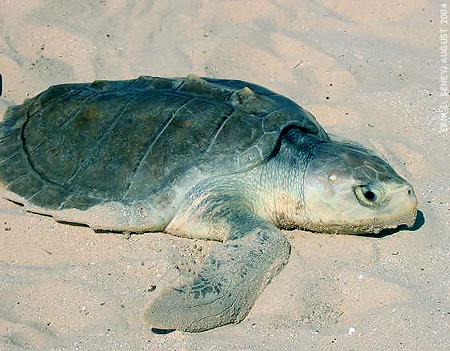 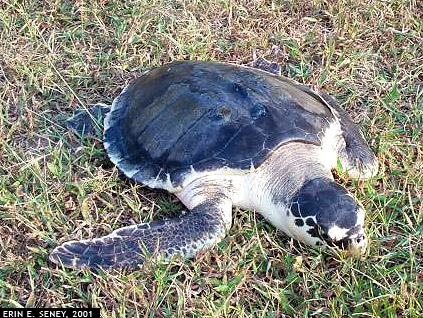 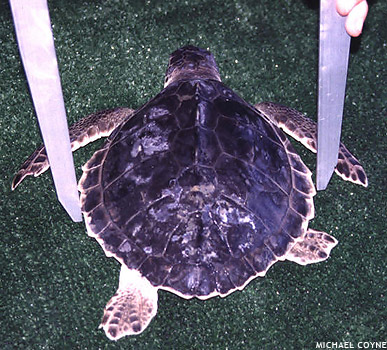 Kemp’s ridley sea turtles, Lepidochelys kempii (Garman, 1880), aka atlantic ridleys, gulf ridleys and mexican ridleys, are a close relative of olive ridley sea turtles and are one of the smallest sea turtles. Adult generally weigh 45 kg with a body length of 65 cm. Adult Kemp’s ridleys’ shells are broad and light gray-olive in color. They are off-white to light yellow underneath which is called their plastron. Juvenile turtles have gray-black carapaces (top shells) and plastrons. Hatchlings have lighter gray-olive carapaces and plastrons. There are 2 pairs of prefrontal scales on the head, 5 vertebral scutes (back plates), 5 pairs of costal scutes (belly plates) and 12 pairs of marginals (rimming plates) on their carapace. Four scutes perforated by a pore are found on each bridge joining the plastron to the carapace. The pore is the opening of their Rathke’s gland which secretes a substance of unknown function. Males resemble the females in size and coloration. Secondary sexual characteristics of male sea turtles include a longer tail, more distal vent, recurved claws and, during breeding, a softened mid-plastron.

Sea turtles spend almost all their lives submerged but must breathe air for the oxygen needed to meet the demands of vigorous activity. With a single explosive exhalation and rapid inhalation, sea turtles can quickly replace the air in their lungs. Their lungs are adapted to permit a rapid exchange of oxygen and to prevent gasses from being trapped during deep dives. The blood of sea turtles can deliver oxygen efficiently to body tissues even at the pressures encountered during diving. During routine activity green and loggerhead sea turtles dive for about 4 to 5 minutes and surface to breathe for 1 to 3 seconds. A female loggerhead tracked at sea made up to 500 dives every 12 hours.

Sea turtles can rest or sleep underwater for several hours at a time but submergence time is much shorter while diving for food or to escape predators. Breath-holding ability is affected by activity and stress, which is why turtles drown in shrimp trawls and other fishing gear within a relatively short time.

The major nesting beach for Kemp’s ridleys is on the northeastern coast of Mexico. This location is near Rancho Nuevo in southern Tamaulipas. The species occurs mainly in coastal areas of the Gulf of Mexico and the northwestern Atlantic Ocean.

Newborn Kemp’s ridleys, Lepidochelys kempii, feed on the available sargassum and associated animals or other epipelagic species (species in the sunlit upper zone) found in the Gulf of Mexico. In post-pelagic stages, the turtle is largely a crab-eater, with a preference for portunid (swimming) crabs. Age at sexual maturity is not known, but is believed to be approximately 7-15 years, although other estimates of age at maturity range as high as 35 years.

Although sea turtles move swiftly in the ocean, they are slow and defenseless on land. Male sea turtles almost never leave the water. Female sea turtles leave the ocean only to lay eggs and, for most species, nest only at night. Females of most species may nest every two to three years. The female Kemp’s ridley has a unique nesting behavior known as the “arribada” or arrival in Spanish. Females congregate in the shallows and all emerge at once to lay eggs on the beach. Nesting season for Kemp’s ridleys lasts from April-July.

Nesting can take between one and three hours. After a female turtle drags herself up the beach, she hollows out a pit with her back legs and deposits between 50-200 eggs the size of golf balls. When the last egg is laid, the turtle covers the eggs with sand, tamps down the sand with her plastron, and flings more sand about with her flippers to erase any signs of the nest.

After about two months, the hatchling turtles emerge at night. The light reflected off the water from the sky guides them to the sea. These days, car headlights, street lamps, or lights on buildings near the beach cause some hatchlings to travel in the wrong direction. Waiting herons make fast meals of other hatchlings. Any babies still on the beach in the morning are easily picked off by predators or die in the hot sun. It is thought that when the surviving hatchlings reach maturity, they return to the beach where they hatched to lay their eggs.

The Kemp’s ridley sea turtle was listed as endangered throughout its range on December 2, 1970, and its status has since risen to Critically Endangered (CR A1ab) on the on the IUCN Red List of Threatened Species:

CRITICALLY ENDANGERED (CR)
A taxon is Critically Endangered when it is facing an extremely high risk of extinction in the wild in the immediate future, as defined by any of the criteria (A to E) as described here.

The Kemp’s ridley population has declined since 1947 when an estimated 42,000 females nested in one day to a nesting population of approximately 1,000 in the mid 1980’s. The decline of this species was primarily due to human activities including collection of eggs, fishing for juveniles and adults, killing adults for meat and other products and direct take for indigenous use. In addition to these sources of mortality, Kemp’s ridleys have been subject to high levels of incidental take by shrimp trawlers. Today, under strict protection, the population appears to be in the earliest stages of recovery. The increase can be attributed to two primary factors: full protection of nesting females and their nests in Mexico and the requirement to use turtle excluder devices (TEDs) in shrimp trawls both in the United States and Mexico.

There are few threats to the nesting beach for this species in Mexico, but the existing threats are potentially serious. Coastal development will result in increased threats to the nesting beach. Only the central part of the prime nesting area is protected by Mexican presidential decree. A primary concern is human encroachment and access along the entire nesting area. However, the wording of the Mexican decree is vague and construction of commercial fishing facilities proceeded in 1987 immediately adjacent to the main turtle camp at Rancho Nuevo. Occasionally, plans for massive expansion of La Pesca (just to the north of the nesting area) as a fishing center or dredging of the Gulf Intercoastal Waterway from Brownsville, Texas to Barra del Tordo (in the south part of the nesting beach) are reported. These plans are alarming because of the assuredly detrimental and possibly disastrous effects that they could have on the nesting population if they were to be completed.

Impacts in the marine environment
1. It is estimated that before the implementation of TEDs, the commercial shrimp fleet killed 500-5,000 Kemp’s ridleys each year. Besides shrimp trawls, Kemp’s ridleys have been taken in pound nets, trawls, gill nets, hook and line, crab traps and longlines. Beginning in 1976, the U.S. and Mexican governments agreed to phase out U.S. shrimping in Mexican waters by 1979. U.S. shrimp vessels continued to illegally operate off Mexico through the mid 1980s. The Mexican shrimp fleet has declined and consists of only approximately 600 vessels, many of which do not operate. Also since 1978, Mexico has closed the nearshore waters off Rancho Nuevo to fishing during the nesting season. However, this closure has not been strictly enforced.

2. The Gulf of Mexico is an area of high density offshore oil extraction with chronic low-level spills and occasional massive spills. The two primary feeding grounds for adult Kemp’s ridley sea turtles in the northern and southern Gulf of Mexico are both near major areas of near shore and offshore oil exploration and production. The nesting beach at Rancho Nuevo is also vulnerable and has been affected by oil spills.

3. The vast amount of floating debris in the Gulf of Mexico constitutes an increasingly serious threat to Kemp’s ridley turtles of all ages. Plastics, monofilament, discarded netting and many other waste items are either eaten by Kemp’s ridleys or become death traps when the turtles become entangled. Ingestion of plastic, rubber, fishing line and hooks, tar, cellophane, rope amd string, wax, styrofoam, charcoal, aluminum cans and cigarette filters has occurred in sea turtles. NMFS has supposedly analyzed stranding data and available necropsy information to determine the magnitude of debris ingestion and entanglement.

4. Dredging operations affect Kemp’s ridleys through incidental take and by degrading the habitat. Incidental take of ridleys has been documented with hopper dredges. In addition to direct take, channelization of the inshore and nearshore areas can degrade foraging and migratory habitat through spoil dumping, degraded water quality/clarity and altered current flow.