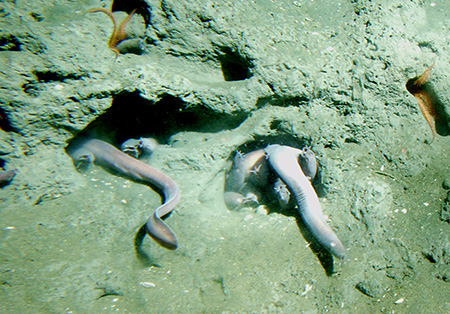 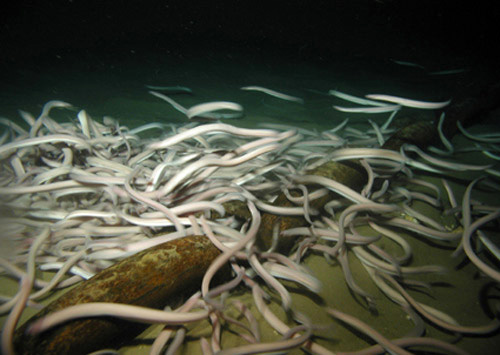 Pacific hagfishes, Eptatretus stoutii (Lockington, 1878), aka California hagfishes, hag-fishes, lamperinas, and slime eels, are one of 60 known species of hagfish. They have a terminally-positioned mouth with four pairs of sensory tentacles or barbells on the lateral sides of their mouths. Their mouth itself is ring-shaped with soft lips and lacks true jaws, relying instead on two pairs of rasps on its tongue to pull and tear at its food.

They have a pineal eye on the top of their head and a pair of vestigial or degenerated eyes located on either side. A single terminally-located nostril lies close to its mouth.

They have poor visual acuity but a good sense of smell and touch.

Pacific hagfish have an anguilliform (eel-like) body capable of reaching up to 63.5 cm in length and weighing up to 1.4 kg.

Twelve pairs of gill pouches are arranged in rows laterally along their body. A pharyngocutaneous duct (esophageocutaneous duct) is present on the left side of the fish behind the last gill pouch opening.

Mucous pores can be found lining both sides of its body. 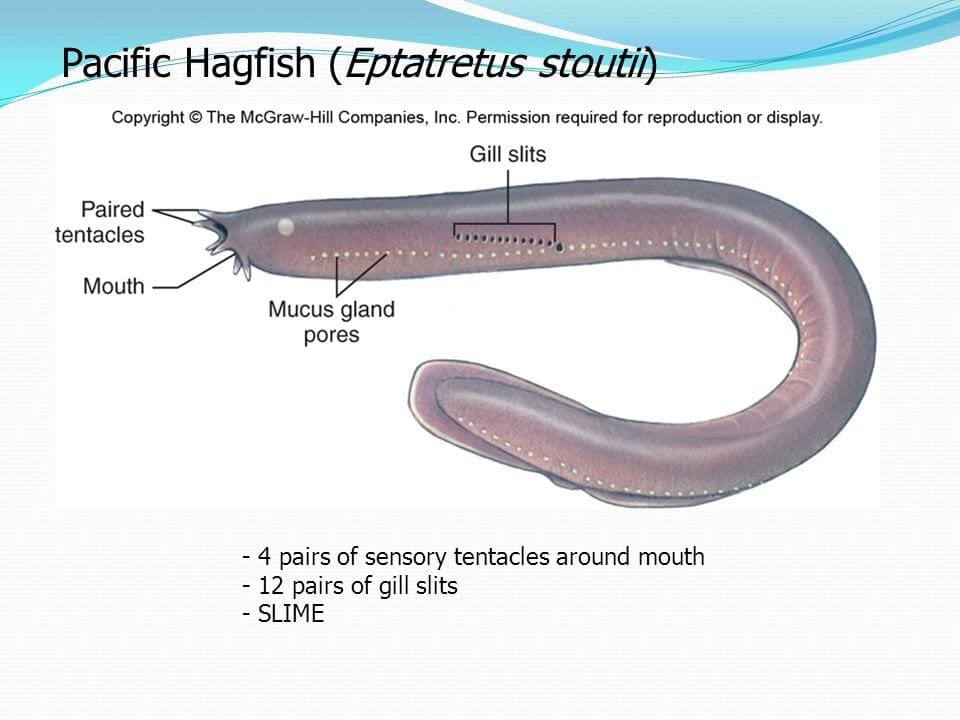 The pacific hagfish has a ventral (under) finfold extending from the last gill pore to the anus and a dorsal (upper) finfold located far back which is continuous with the broad rounded caudal (tail) fin.

In coloration they can vary between dark brown, tan, grey, or brownish red and are often tinted with blue or purple. Their ventral (under) surface is often lighter and occasionally shows white patches.

As with other species of hagfish, Pacific hagfish live in burrows on muddy sea floors in shallow to deep waters. They are well known for feeding on carrion and their ability to produce copious amounts of defensive slime when agitated.  Their slime and low metabolic rates are subject to ongoing scientific research. Additionally, Pacific hagfish are fished commercially for their meat and their skins are processed into ‘eel-skin’ products.

Pacific hagfishes, Eptatretus stoutii, inhabit the temperate anti-tropical regions of the North and South Pacific along muddy sea floors. They can be found from depths of 16 to 966 m but are found more commonly in depths of 40 to 100 m. They may make seasonal migrations to deeper waters similar to other species of hagfish though this remains unconfirmed at this time. Although Pacific hagfish can be found occasionally on rocky bottom they are predominantly found on muddy bottoms in which they build their burrows.

Pacific hagfishes, Eptatretus stoutii, feed on marine worms and other invertebrates as well as scavenging the carcasses of larger animals deposited on the sea floor. They are nocturnal feeders, using their sense of smell, touch and taste (through Schreiner organs found throughout its skin) to locate prey and carrion. Pacific hagfish will enter carcasses through the main body openings, the mouth and anus, then proceed to consume the viscera and muscles from the inside out. Lacking jaws, the hagfish locks onto the flesh with its tongue rasps then knots its body to produce a ripping force. In order to deter predators and competitors hagfish are known to extrude slime while eating carrion.

Reproduction in Pacific hagfish is poorly understood. They lack copulatory organs and immature specimens can be found with bisexual juvenile gonads. This has led to speculation regarding hermaphroditism though some studies have only found exhibited hermaphroditism in only 0.02% of specimens studied. Adult hagfish typical display separate sexes but evidence suggests sequential hermaphroditic periods in response to population pressures.

There is no known spawning season as males and females are found at different maturation stages throughout the year and females can be found carrying distinctly separate egg batches. Smaller eggs do not develop until the largest batches have completed their development. Female hagfish may lay batches of 20 to 30 eggs usually found in shallow waters only 15 to 20 meters deep.

While aging specimens remains a challenge due to their cartilaginous skeletons it is estimated that in the wild individuals may live up to 40 years.

Although thought to be common throughout their range, the IUCN assessment in 2009 listed them as data deficient. It is thought that the current population trend is decreasing due to a continuing decline in area extent and quality of habitat. As benthic organisms, Pacific hagfish habitat is vulnerable to bottom trawling, sea floor mining, development and pollution.