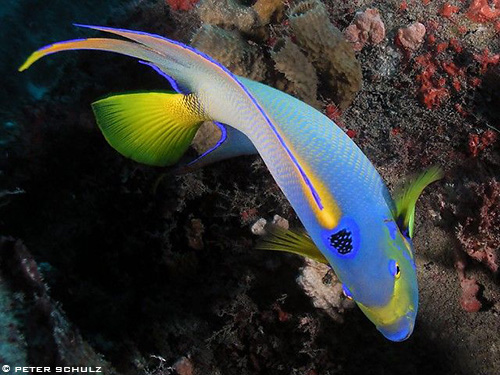 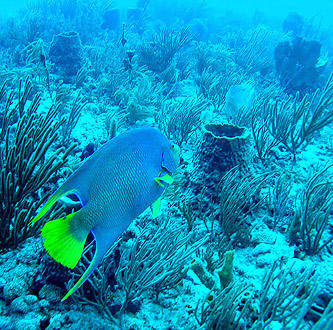 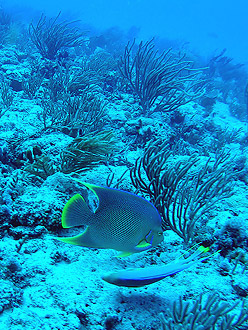 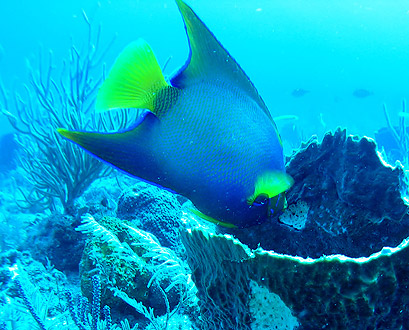 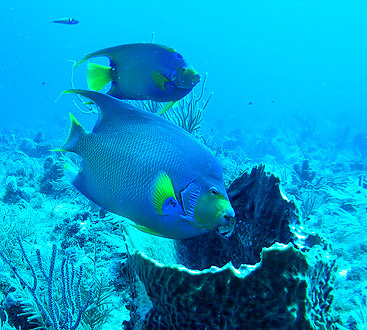 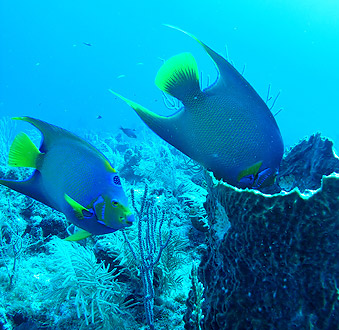 Queen angelfishes, Holacanthus ciliaris (Linnaeus, 1758), aka blue angelfish, golden angelfish, queen angel and yellow angelfish, are one of the most beautiful reef fish in the ocean. Their bodies are highly compressed and their heads are blunt and rounded. Queen angelfishes have one long dorsal fin running along the top of their bodies. They are brilliantly colored in iridescent blue and yellow and are very similar to blue angelfishes, H. bermudensis. The primary difference between the two is the electric blue ringed dark spot on the forehead of queen angelfishes that resembles a crown, hence their name. Queen angelfishes also have a completely yellow tail. The two species have been known to interbreed creating hybrids that share color characteristics of both species. Adults reach up to 45 cm and weigh up to 1.6 kg.

They are commonly found in pairs.

Queen angelfishes, Holacanthus ciliaris, feed primarily on sponges, but also feed on tunicates, jellyfish, corals, plankton, and algae. Juveniles serve as “cleaners” and feed on the parasites of larger fish at cleaning stations.

Because queen angelfishes, Holacanthus ciliaris, are often found in pairs, they are thought to share long-term monogamous bonds.

During reproduction, pairs bring their bellies close together and release clouds of sperm and eggs. Females release between 25-75 thousand eggs each time they mate, and up to 10 million eggs each during each spawning cycle.

Fertilized eggs are transparent and float until they hatch into larvae 15 to 20 hours later. At this stage, queen angelfishes lack eyes, fins, and digestive organs. A large yolk sac is attached, which is fully absorbed in 48 hours while each larvae develops the physical characteristics that allow them to swim.

After the yolk sac is absorbed, the larvae feed on plankton and grow rapidly for about a month until they reach 15-20 mm in length. At this stage they settle on the bottom of the reef near finger sponges and coral where they set up cleaning stations and guard their territory.

Queen angelfishes, Holacanthus ciliaris, have been associated with ciguatera poisoning which is caused by the accumulation of ciguatoxins in the flesh of tropical marine fishes. Ciguatoxins, produced by marine dinoflagellates, grow on algae and are ingested by herbivorous fishes. Larger fish also accumulate the toxin by feeding on smaller herbivorous fishes and become reservoirs of toxic levels (to humans) of ciguatoxin. Signs and symptoms include gastrointestinal problems, weakness in the arms and legs, and trouble distinguishing between hot and cold. Ciguatera poisoning can last for several weeks.

Queen angelfishes are taken from the wild commercially for the aquarium trade.