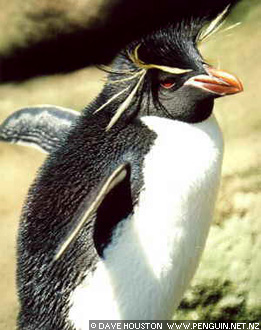 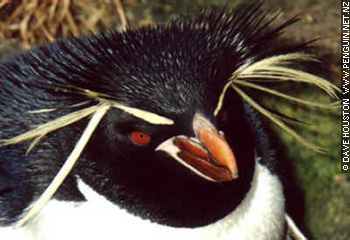 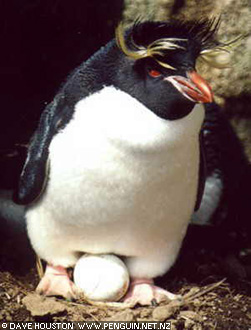 They are among the smallest of the world’s penguins averaging 52 cm in length and 3 kg in weight. Their distinct yellow stripe above each eye extends upward into a yellow crest on top of their head. Behind their head they have a black occipital (back of the head) crest. They have red eyes, short red-brown bulbous bills and pink feet and legs. Females are often slightly smaller than males.

In spite of their small size, rockhoppers are known to be quite aggressive. They are not intimidated by humans or by other birds and animals, even larger ones. Rockhoppers incubating their eggs will peck at intruders, even other rockhoppers or the wings of neighboring albatrosses that come too close. In spite of their fierce countenance with intruders, however, rockhoppers are very gentle with their partners and are often observed preening one another, a behavior known as

Southern rockhopper penguins’ range includes the Falkland Islands, Argentina and Chile; the range of the eastern rockhopper includes Marion, Prince Edward, Crozet, Kerguelen, Heard, MacDonald, Macquarie, Campbell, Antipodes and the Auckland Islands. The northern rockhopper can be found near Tristan de Cunha, Gough, St. Paul and the Amsterdam Islands. They prefer to nest among steep, rocky slopes that near the water’s edge. Breeding sites may be covered by grasses or shrubs, however older colonies typically include a worn path between the rocky breeding ground and the water. Breeding sites of rockhopper penguins are often close to sources of fresh water that this species is known to use for bathing and drinking.
https://www.youtube.com/watch?v=y5SkJEleUMk

Rockhopper penguins, Eudyptes chrysocome, often have enormous breeding colonies of up to one hundred thousand (100,000) nests at a single site with nesting densities ranging from 1.5 to 3 nests per square meter. They often share colonies with nesting albatrosses and/or cormorants. Rockhoppers return to the same breeding site each year and even use the same nest when possible, with minor touch ups with nesting material if necessary.

Breeding begins in early October when males arrive at the breeding site a few days before females. Breeding takes place as soon as the females arrive and 2 eggs are laid 4-5 days apart in in early November. The first egg laid is typically smaller than the second (80g vs. 110g) and is the first to hatch. Incubation lasts about 33 days. The eggs are incubated by the parents as a pair for the first 10 days, then males leave to feed while the female incubates during the second shift. The male returns to take on the third shift and he generally remains for the duration of incubation and afterward to brood the chicks while the female leaves to forage and returns to feed the chicks.

Chicks lack the yellow crest and red-brown bill of adult birds. When chicks begin to molt into adult plumage, sexually immature juveniles join the colony to molt. These young penguins can be distinguished from the newly fledged chicks by a faint yellow stripe above their eye the red-brown bill of adult rockhoppers. Rockhoppers reach sexual maturity at about 4 years of age.

Commercial fishing around the Falkland Islands has reduced population size from an estimated 2.5 million breeding pairs in 1984 to 300,000 breeding pairs more recently.