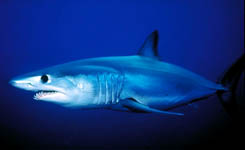 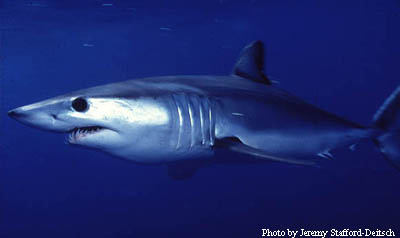 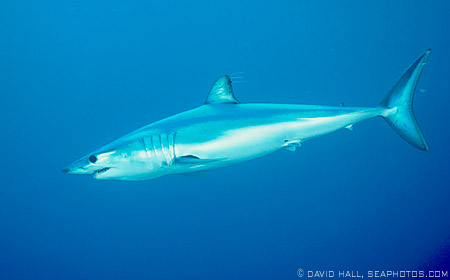 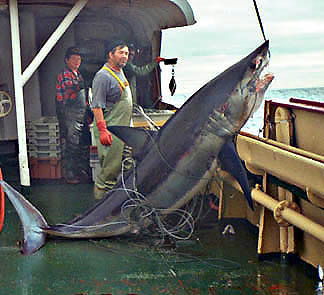 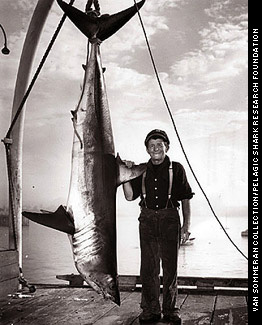 Shortfin mako sharks, Isurus oxyrinchus (Rafinesque, 1810), aka makos, shortfins, short-finned makos, blue pointers, mackerel sharks, blue dynamites, bonitos, spriglios, palomas — are truly beautiful animals. They are well-adapted and active pelagic (open water) sharks. Like their cousin, the great white, they keep their body temperature warmer than the surrounding water using a high metabolic rate and efficient heat-exchange system. They are legendary swimmers reaching sustained speeds of 35 kph (with bursts to over 80 kph) and have been known to travel over 2,092 km in little over a month. These sharks have rapid growth rates, twice as fast as some of the other Lamnidae species. Males mature at around 2 m while females mature at about 2.6 m with maximum lengths of 4 m and max weights of over 500 kg.

There are two types of makos, the most common and widely spread are the shortfin makos, Isurus oxyrinchus, and the less common and more specialized longfin or big-eye makos, Isurus paucus. Makos represent the largest, fastest most sophisticated species of pelagic shark on our planet.

An ancient relative Isurus hastilus is nearly identical in terms of tooth structure and function. The ancient mako hastilus was probably 6 m long and nearly 2,800 kg; it was the Cretaceous grand mako that shared the seas with kronosaurs, ichthyosaurs, and plesiosaurs.

The mako sharks are an easily recognizable shark exhibiting all the traits of a Lamnid, they are an extremely robust and streamlined shark with well developed eyes (larger in the longfin) and an endothermic circulatory system (warm bloodedness) that is known to maintain elevated muscle temperatures of up to 0.6°C above the ambient water temperature. Makos are heavily built with the trademark strong caudal keels that are a common feature among Lamnids such as great whites, porbeagles, and salmon sharks.

Longfin makos are apparently a more deep water tropics-dwelling predator of which little is known. It wasn’t even described as a separate species until 1966.

Makos have striking coloring with deep purple to indigo dorsal (upper) surfaces, silvery sides, and white ventral (under) surfaces. The longfin mako has a shaded coloration around their mouth and the underside of their snout, unlike the shortfin mako which is snow white around their mouth. Only blue sharks can rival the makos for beautiful coloration.

Mako sharks have five large gill slits, well-developed eyes (slightly larger in the longfin) and pronounced knife-like, non-serrated teeth. An extremely fast and active shark, they were propelled to “big-game fishing” fame by author Zane Gray who was taken by the animals menacing appearance and volatility during the early part of this century. Author Ernest Hemingway was also impressed by the mako and depicted them as the marlin-marauding monster in his classic novel the Old Man and the Sea.

Author Richard Ellis also wrote an excellent short story about a deep sea contest between a mako and a broadbill swordfish in his popular work: The Book of Sharks.

Mako sharks are found around the world in warm and temperate seas, in the Pacific from Oregon to Chile, and juvenile makos are common in southern California during the summer months. Some scientists believe that female mako sharks migrate into San Diego’s waters to have their pups. From spring to autumn, pups and 1-2 year-old sharks can be found off San Diego, several miles out at sea.
https://www.youtube.com/watch?v=xDoiv7K-t_s

The makos of today feed on some of the worlds fastest and highly developed tunas and billfish and are therefore considered apex predators. Makos are also known to prey on squid, dolphins, porpoises, blue sharks, bonito, sea turtles, and mackerels.

Shortfin mako development is ovoviviparous. Developing young are intra-uteral (within the uterus) cannibals that consume lesser developed siblings. Which is known as oophagy. Very little else is known about the reproduction of shortfin makos because females abort embryos during capture. Litters of over 8-10 pups are uncommon.

Female shortfin makos usually become sexually mature at a length of 3 m. Developing embryos feed on unfertilized eggs in the uterus during the gestation period of 15-18 months. The 4-18 surviving young are born live in the late winter and early spring at a length of about 70 cm. It is believed that females may rest for 18 months after birth before the next batch of eggs are fertilized.

Makos are prized gamefish. Although an oceanic species, the shortfin mako’s power, aggressiveness, teeth and great speed, make it a danger to humans. Shortfin makos have been blamed for a number of both nonfatal and fatal attacks on humans. Divers who have encountered shortfin makos note that they swim in a figure eight pattern and approach with mouths open prior to an attack. Shortfin makos frequently damage boats and injure fishermen after being hooked. Most attacks occur when the shark is either provoked or caught on the end of a fishing line. The mako is fished commercially and for recreation. In some areas this shark has been wrongly blamed for the depletion of commercial fishing stocks i.e., mackerel, tuna, etc.

The world’s affinity for shark fin soup and the flesh of the shortfin mako has lead to a decrease in population numbers. Worldwide, the shortfin mako is not only subject to overharvesting by direct hunting, they are also often by-catch victims of the tuna and swordfish fishing industries. As a result, the U.S. National Marine Fisheries Service (NMFS) has included the shortfin mako on their list of “managed” pelagic sharks. The NMFS has reduced the number of commercial and recreational shortfin mako catches allowed per year by 50% in an attempt to counter act its declining numbers. However, the NMFS regulations apply only to the United State’s Atlantic and Gulf waters. Also hastening their population decrease is their slow reproductive rate.

The shortfin mako is listed as Vulnerable (A2abd+3bd+4abd) on the IUCN Red List of Threatened Species:

VULNERABLE (VU) – A taxon is Vulnerable when the best available evidence indicates that it meets any of the criteria A to E for Vulnerable (see Section V), and it is therefore considered to be facing a high risk of extinction in the wild.