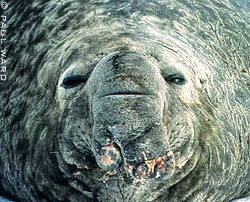 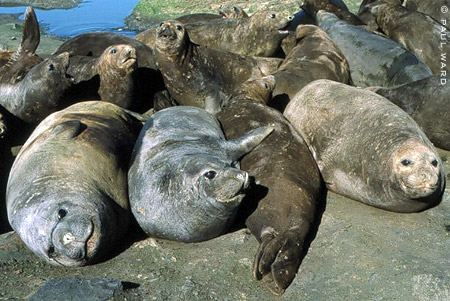 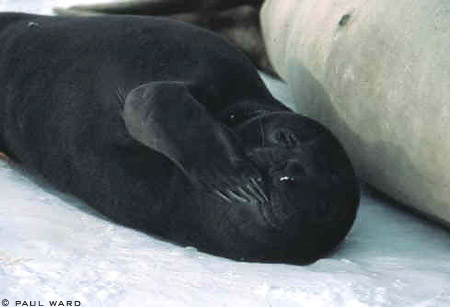 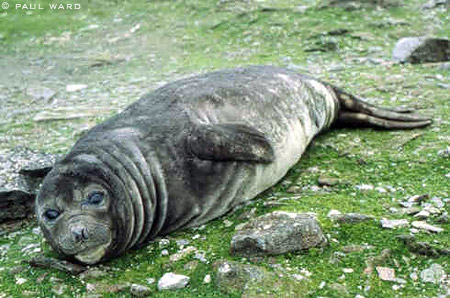 Southern elephant seals, Mirounga leonina, are found around the subantarctic islands near the Antarctic Polar Front. South Georgia is home to the largest population with more than half of the entire species. Other populations are found at Macquarie Island, Heard Island and the Kerguelen Islands. Rare births of southern elephant seals have also been reported in New Zealand, Australia and South Africa, and some wandering individuals have been found as far north as the equator. The total population has been calculated at about 600,000.

Southern elephant seals, Mirounga leonina, inhabit open water outside the breeding and molting seasons for an average of 10 months per year to feed on squid and fish. During this time, the seals dive day and night to average depths of 300-600 m for 20-22 minutes. Their deepest dives are made during daylight hours. They have been known, however, to dive as deep as 2,000 m for as long as 2 hours. As much as 90% of their time is spent beneath the surface, coming up to breathe for 2-3 minutes between dives. Adult southern elephant seals return to their feeding grounds in the Antarctic twice annually traveling up to 2,000 km each way, once following breeding season and the second after molting. The Argentinean population returns to feeding grounds in the southern Atlantic Ocean.

Female southern elephant seals, Mirounga leonina, reach sexual maturity between 2-4 years of age, giving birth to one pup annually, although some have been observed nursing 2 pups. Males reach sexual maturity between 3-6 years of age but do not begin breeding until about 10 years of age. Females give birth and breed in September-November 0-10 days after coming ashore. The mother does return to sea to feed until her pup is weaned. She lives on her blubber generally losing about 35% of her body weight, or up to 8 kg per day. Pups are born with dark brown-black fur, which they will molt about 1 month later for a shorter coat of gray hair. They measure about 1.3 m long and weigh 45-50 kg as newborns, and 135-140 kg by the time they are weaned about 23 days later.

Dominant breeding males arrive a month before the females and smaller males to fight for dominance and females. Only 2-3% of males are successful winning “breeding rights” to large numbers of females—exceeding 100 in some cases. The mother mates between 3-5 days before her pup is weaned, then returns to sea after mating to feed. Pups leave the breeding ground 3-8 weeks later to feed. If food is not readily available, pups depend on their body reserves to survive. Pup mortality can be high in heavily populated breeding territories.

Adult males, which are often up to 10 times the size of breeding females, also do not feed during the breeding season and can lose more than 40%, or 12 kg per day, of their body weight. The amount of time spent ashore by males during the breeding season varies greatly, ranging from 60-90 days onshore. Females typically spend about 1 month onshore. Following the feeding period, adults return to molt in January-February for 30-40 days, again remaining ashore without feeding for the duration.

The southern elephant seal, Mirounga leonina, was heavily hunted for its oil for centuries. Hunting of southern elephant seals south of 60°S is now regulated by the Convention for the Conservation of Antarctic Seals (CCAS), and the species receives additional protection in various countries within its range.

The southern elephant seal population has declined significantly over the last forty years. On Heard Island numbers have decreased by 50%, 84% on Marion Island, 57% on Macquarie Island, 90% on Campbell and Signy Islands, and up to 80% on some of the Kerguelen Islands. Fortunately, more than half the species are members of the South Georgia colony, the largest colony, which has remained relatively stable. The Argentinean colony appears to be increasing. The reasons for the decline are not yet understood, however the decline seems to be specific to southern elephant seals more than other species in the Southern Ocean. There is no commercial fishing for deep water species in the feeding areas of the declining Macquarie Island population. In 1999 an Argentinean marine mammal scientist warned that overfishing is threatening the survival of the Península Valdés population, particularly if squid stocks are depleted near the seals’ feeding grounds along the edge of the continental shelf.

The decline may be due to the dramatic recovery of southern elephant seal populations when commercial sealing ended creating greater competition for increasingly scarce food sources. The Península Valdés colony faces the additional problem of disturbance caused by coastal development and tourism. Southern elephant seals have also been observed entangled in fishing net and contaminated with oil pollution.

In 2000 branding of southern elephant seals on Macquarie Island by scientists was banned by the Australian Environment Minister because the brands became infected leading to a decline in the health of branded seals. Since 1993, approximately 14,000 weaned southern elephant seal pups had been branded as part of method to track population decline. In 2001 the Tasmanian government also banned invasive research on elephant seals on Macquarie Island until a full review of the research could be undertaken.

In 2000, southern elephant seals on Macquarie Island, also a UNESCO World Heritage site, received additional protection when the 16 million hectare Marine Park was established on the eastern side of the island. Also in 2000, the Tasmanian government extended the Macquarie Island Nature Reserve to cover all Tasmanian waters out to three nautical miles surrounding the island.

Weaned pups and juveniles are preyed upon by orca (killer whales) and sometimes leopard seals.