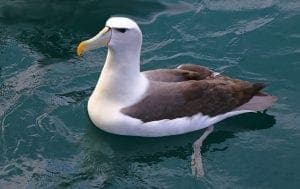 Albatrosses are large birds and as such may be more vulnerable to becoming bycatch.

The bycatch by fishing vessels can kill hundreds of thousands of seabirds each year, understanding which factors influence the likely-hood of a bird becoming bycatch could inform conservation policy and bycatch reduction measures.

A new study on seabirds in Aotearoa (New Zealand) investigates the influence of the sensory faculties of birds, the size of appendages and the general size of the seabirds on their risk of falling victim to fishing gear. Researchers investigated the records of bycatch rates for 70 species of seabirds as well as comparing the anatomy of 6 species with differing bycatch rates.

The conclusions drawn are two-fold. Larger animals with wider wingspans or animals with relatively larger heads, bills and wings have appendages which project further from the body and are more likely to catch on nets, hooks or lines. Additionally, animals with relatively larger eyes and nostrils may be assumed to have more developed or sensitive sensory organs. This suggests that fishing vessels and their deployed gear may act as sensory traps for seabirds – giving similar cues or signals to prey items and disproportionately attracting seabirds with more acute senses.

The paper “Seabird bycatch risk correlates with body size, and relatively larger skulls, bills, wings and sensory structures” by A. M. Heswall, M. R. Friesen, A. L. Brunton Martin and A. C. Gaskett, 23 April 2021 is published in Marine Biology available through the SpringerLink.